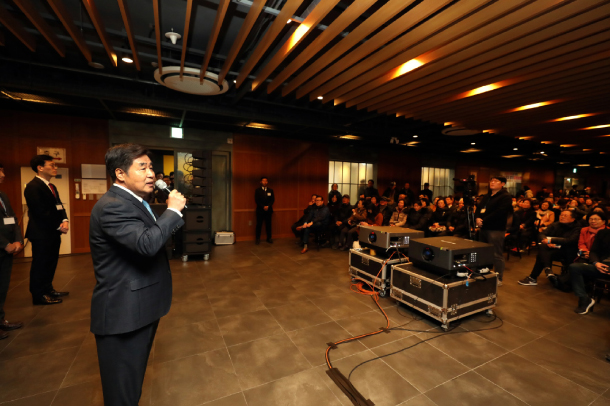 “The promise of the proposal must be kept. I will build a masterpiece that I would like to live in and leave to my grandchildren,” Kim told union members at the briefing held in the Louisvis Convention Center in Songpa District, southern Seoul.

Daewoo E&C emphasized it is able to maximize profits by singularly managing the exterior appearance, landscape, community facilities and state-of-the-art electronic systems and reducing construction costs by 90 billion won ($79.8 million) or more compared with competitors and shortening the construction period by seven months.

On Sept. 19, Daewoo E&C signed a joint venture agreement with KHNP, Korea Electric Power Corporation (Kepco) E&C, Kepco Nuclear Fuel, Kepco Korea Plant Service & Engineering and Doosan Heavy Industries & Construction to win orders for new nuclear power plants in Czech Republic and Poland. The company has been selected as the construction company for the project and concentrating its efforts to promote the image of Korea.

“Daewoo E&C has been a leading player in Eastern Europe and we expect the overseas infrastructure and high recognition based on this will contribute to the construction of the local network in Czech Republic,” said Kim. “We are determined to achieve Korea’s exports of Czech plants.”