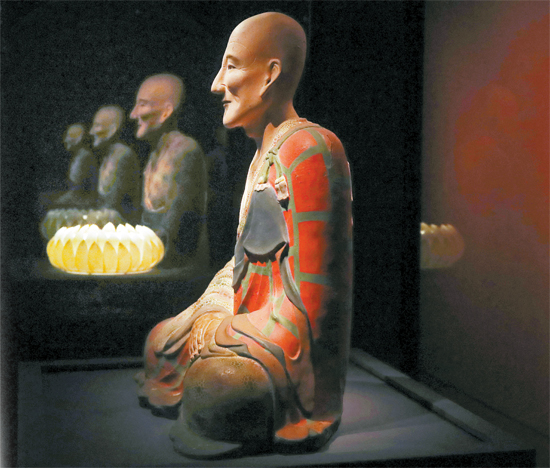 The Statue of Master Huirang sits alone at the “Goryeo: The Glory of Korea” exhibition at the National Museum of Korea in central Seoul, while the glass case next to him, for his disciple Taejo Wang Geon, the founder of Goryeo (918-1392), is left empty. North Korea failed to respond to a request that it lend the relic for the exhibition. [YONHAP]

Two glass cases have been installed at the National Museum of Korea in central Seoul for the grand “Goryeo: The Glory of Korea” exhibition that kicked off on Tuesday. The case on the right displays a statue of Master Huirang, who was the teacher of Taejo Wang Geon - the founder of Goryeo (918-1392). But the glass case on the left, which says it displays the Statue of Wang Geon, is empty.

Don’t worry, the relic hasn’t been stolen. Rather, it failed to make it to Seoul from Pyongyang, North Korea. The statue was excavated in 1992 from Hyeonneung, the tomb of Wang Geon, located in Kaesong, a North Korean city near the border and is now part of the collection at the North’s Korean Central History Museum. The National Museum of Korea requested that North Korea lend the statue for “this meaningful exhibition that looks into the glory years of Goryeo,” but failed to make it happen.

“The statues of the two men, one symbolizing the authority of the throne, which was the key to protecting the nation, and the other the spiritual foundation for managing the nation, are practically the only extant Goryeo sculptures of historical futures,” said Chung Myung-hee, the curator of the exhibit. “These images of the teacher and disciple have never been seen together since they were made, so their first meeting, in 1,100 years, is eagerly awaited. We’ll continue to leave this case vacant and hope for the statue to arrive one day during the exhibition.”

The Statue of Master Huirang is Korea’s Treasure No. 999 and belongs to Haein Temple in Hapcheon, South Gyeongsang. 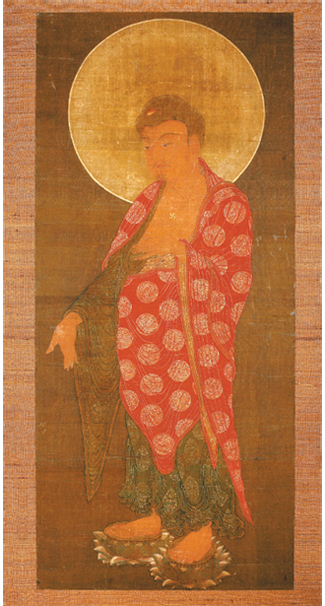 A rare painting of Amitabha from the Museo Delle Civilta in Italy.

Although the Statue of Wang Geon couldn’t make it to the exhibition’s opening, other valuable treasures that represent the Goryeo Dynasty are on display, despite concerns about a lack of cooperation from temples and other countries to allow their treasure to travel.

“It was a long and difficult process,” said Bae Ki-dong, the director general of the museum. “But our staff worked very hard and managed to bring in some 450 artifacts from 56 different organizations and institutions from both Korea and abroad including the United States, England, Italy and Japan.”

To mark the 1,100th anniversary of the founding of the Goryeo Dynasty, national museums across the country have been holding special exhibitions on the Goryeo Dynasty, and, according to Bae, this exhibition at the National Museum of Korea “will be the finale of the year-long celebration.”

“We couldn’t commemorate the 1,000th year since Goryeo’s establishment in 1918 as Korea was under Japanese occupation,” he said. “That is why the museum has put in an incomparable amount of effort and budget into this exhibition, which is the first large-scale, comprehensive exhibition of Goryeo art.”

Goryeo was established by King Taejo, or Wang Geon in 918, at a time of division and disintegration of nations. The dynasty persevered for some 500 years and during the time it had active exchanges with neighboring countries and developed a unique and cosmopolitan culture, and even made itself known to the world, giving Korea its current name. Compared to other dynasties like Goguryeo, Baekje, Silla, and Joseon, the art of Goryeo has been somewhat neglected, as they are relatively “less showy” or “sophisticated,” according to Chung, “but no less important to be neglected or forgotten.”

To allow visitors to easily understand Goryeo, Chung decided to organize the exhibit under four themes based on the concept “the story of Goryeo.”

“So basically, this story on Goryeo is in four chapters,” she said, “and the first chapter opens with the story on Gaegyeong, the capital city of Goryeo located in the center of the Korean Peninsula.”

Back in the Goryeo Dynasty, Gyegyeong, which is now somewhere close to the northwestern part of Gyeonggi near Mount Songak, was an international city frequented by many foreigners.

Having formed diplomatic relations with the Song Dynasty, the Khitans, and the Jin Dynasty, Goryeo traded a wide variety of goods. Some 12 kilometers (7.45 miles) from Gaegyeong was the port of Byeongnando, which also saw a lot of cargo ships and foreign merchant ships come and go. These ships, according to Chung, served as a channel for the introduction of diverse, luxury household goods and craft items, as well as new knowledge and culture. 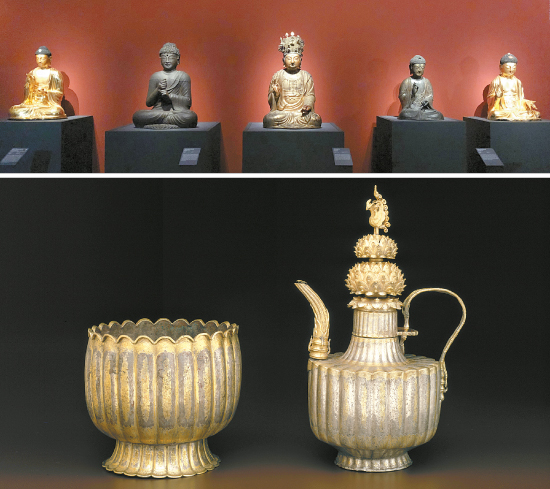 Top: Five statues of Buddha - from left, Bhaishajyaguru from Janggok Temple; Vairocana; Avalokiteshvara; Amitabha; and another Amitabha from Daeseung Temple. Above: A gilt-silver ewer and basin are a part of the collection from the Museum of Fine Arts in Boston. These are some of the royal artworks of the Goryeo Dynasty. [NATIONAL MUSEUM OF KOREA, YIM SEUNG-HYE ]

“It is here where so many foreigners came, that the name ‘Corea’ from ‘Goryeo’ became known around the world,” Chung explained.

The second chapter opens with the story of the Tripitaka Korean Woodblocks which were created during this dynasty.

The actual Tripitaka Koreana, the complete collection of Buddhist scriptures curved on over 80,000 woodblocks, was not authorized to leave the Haein Temple, but the exhibition displays the story about how they came to be created, and displays other Goryeo woodblocks, such as the Avatamsaka Sutra carved in 1098.

The following sections allow visitors to witness how people of Goryeo enjoyed tea and their brilliance in craftworks can also be enjoyed in the final section.

“Since Goryeo was the dynasty that really put Korea on the world map, I hope that not just Koreans, but also visitors from other parts of the world can all come to the exhibition and learn about the roots of Korean culture,” said Bae.