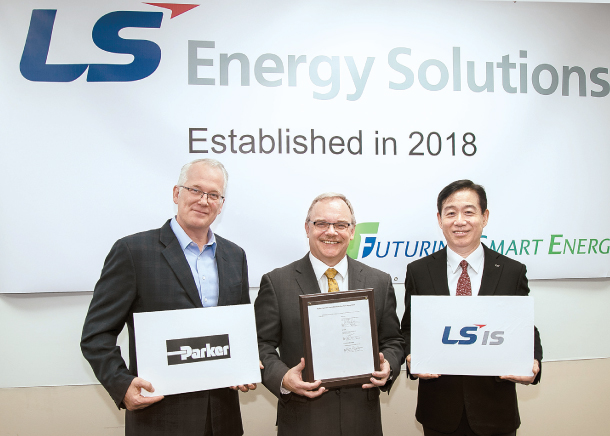 With the acquisition, LS Energy Solution is now the largest energy storage system (ESS) supplier in North America. The EGT division of Parker Hannifin, which entered the ESS business in 2007, had 400 megawatts of installed capacity in the global market, including Europe, South America, Australia and Southeast Asia. After adding LSIS’s ESS assets, the installed capacity is now more than 700 megawatts.

“With this acquisition, we secured an outpost from where we can expand to overseas markets with LSIS innovative smart-energy technology,” said LSIS Chairman and CEO Koo Ja-kyun. “First, we will achieve tangible business success from the North American market, which is a strategic region globally.”

He said, by 2030, the accumulated capacity for ESS globally is expected to be around 125 gigawatts, which is roughly 66 times the 2016 level.

“Eight countries including Korea, the United States and China will account for 70 percent of the installed capacity,” Koo said. “Our long-term goal is leading the industry trend and becoming a global player by securing the market early through pre-emptive investments.”

“With the rapid transformation of the energy landscape, including the extensive deployment of renewable power sources and microgrids - the need for flexible and cost-effective ESS will continue to grow,” Hoelscher said.