Moon Seon-min had a good year

Moon Seon-min had a good year 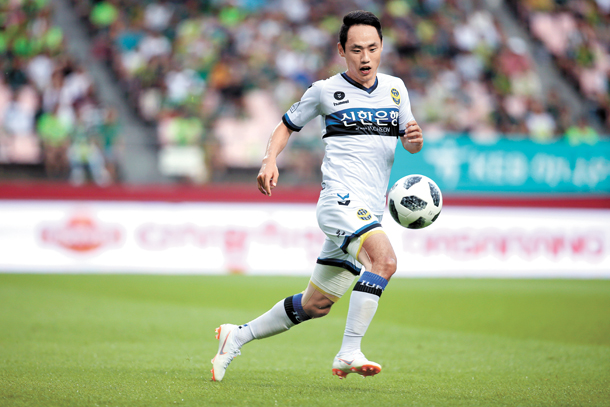 Moon Seon-min of Incheon United couldn’t have asked for a better year than 2018. 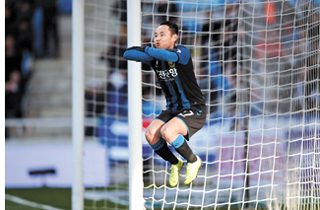 Moon Seon-min celebrates after scoring a goal against Jeonnam Dragons at Incheon Football Stadium in Incheon on Dec. 1. [K LEAGUE]

At the beginning of the year, Moon was a virtual unknown in the K League. A second year pro in the K League, Moon got off to a great start when he joined the Korean national football team in May and competed at the World Cup in June.

In the K League, Moon scored 14 goals for Incheon, becoming the top scorer among domestic players in the league.

During Incheon’s final match of the season against the Jeonnam Dragons on Dec. 1, Moon scored the winner, preventing the team from heading to the relegation playoff.

To finish off the year, Moon was invited to the K League awards ceremony on Monday. Moon walked away without an award, but he wasn’t complaining. Instead, he was all smiles throughout the event.

“Just by attending the awards ceremony, I’ve achieved all my goals that I set for myself at the beginning of the year,” Moon said. “2018 was such a good year that I feel overwhelmed. Not only in my football career, but it was a big turning point in my life.”

Moon has taken an unusual career path as he was set on playing in Europe. He wasn’t able to sign up for the K League rookie draft as he was too busy going to try-outs for European clubs.

Then, after he graduated high school in 2010, Moon competed in a Nike-sponsored competition, “The Chance.” A total of 75,000 players from 40 different countries signed up for the competition, and Moon was one of eight lucky contenders to move to Britain and join the Nike Academy.

At the time, Moon was highly complimented by scouts from clubs in England for his creativity, great passing ability and defense. Moon played four seasons with Ostersunds FK, a third-tier club in Sweden, and two seasons with Djurgardens IF, a top-flight Swedish club, before joining Incheon in 2017.

Then, in his first season with Incheon, Moon scored four goals in 31 matches.

Before he started his second K League season, Moon joined thousands of other Koreans in traveling to Gangneung in Gangwon on the east coast and watching the sunrise for the New Year. As he watched the sun rise over the sea, Moon says he wished to get 15 attack points and an invitation to the K League awards. His hard work in Incheon paid off - he also got to compete at the 2018 FIFA World Cup.

“I was planning on going on a vacation during the World Cup,” Moon said. “I made reservations at a hotel so I was really surprised to get selected onto the national team. I had to pay cancellation fees, but I don’t regret any of it.”

Although Moon’s 2018 season seems successful, it hasn’t all been easy. When Moon appeared in matches against Mexico and Germany, he made mistakes and missed opportunities to shoot after dribbling through the defense. Due to this, he was heavily criticized by Korean football fans.

But instead of the negatives, Moon only took away positives from the World Cup.

Just as he said, Moon’s play seems to have improved. When he returned to the national team in November, he scored a goal during a friendly match against Uzbekistan.

“When I scored against Uzbekistan, I was surprised, too,” Moon said. “I was so surprised that I couldn’t even celebrate properly. I also couldn’t do anything when I scored my debut goal for the national team. If I can compete at the Asian Cup, I really want to celebrate my goal properly.”

This season, Moon had a unique celebration where he folded his arms and jumped up in the air. Since he never got to do it after scoring a goal with the national team, the upcoming Asian Football Confederation (AFC) Asian Cup is his best chance.

Recently, Moon was added back to head coach Paulo Bento’s national team training roster on Tuesday. Since Bento will announce his final roster on Dec. 20, Moon needs to prove his worth over the next two weeks.