JYJ’s Jun-su hits the ground running: Just weeks after he finished military service, the singer is on stage in ‘Elisabeth’

JYJ’s Jun-su hits the ground running: Just weeks after he finished military service, the singer is on stage in ‘Elisabeth’ 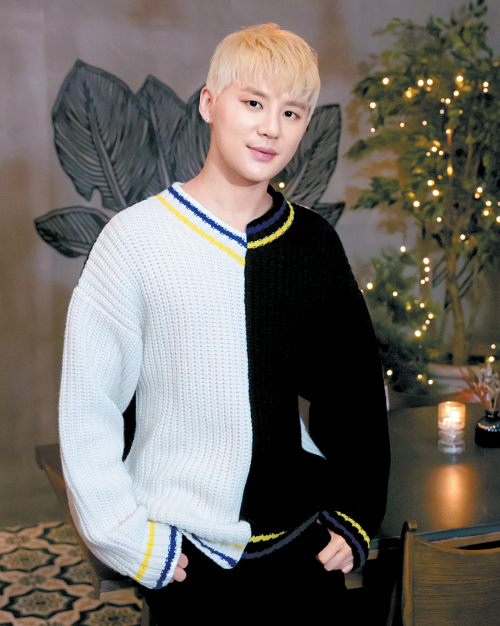 Less than a month after being discharged from the military, Kim Jun-su from boy band JYJ staged solo concerts and is appearing in the musical “Elisabeth.” [ILGAN SPORTS]

It has only been a month since Kim Jun-su from boy band JYJ was discharged from the mandatary military service, but the 31-year-old singer cannot stand being idle.

For four days starting on Nov. 30, Kim performed in his “Way Back Xia Concert” series, held at Jamsil Arena in southern Seoul, and has also been cast to play the role of death in the musical “Elisabeth.” He played the same role in the musical five years ago.

Despite jumping right back into work, Kim thought it would be natural for him to see a dip in his career due to his limited appearances on television.

“I thought it would be natural for me to slide in my career because there is no proper means for me to promote myself [as a singer] on television,” said Kim during an interview with Ilgan Sports, and affiliate of the Korea JoongAng Daily.

Following a tense legal battle with JYJ’s former agency, SM Entertainment, JYJ has been tacitly banned from appearing on most broadcast networks. It has been around six years since the members of the group have appeared on television as singers.

The following are edited excerpts from the interview with Kim.

Q. It has been around a month since you were discharged from the military. How have you changed since serving in the military?

A. I realized that every moment is very special and joyful. I learned that I refused many good opportunities my agency offered, not realizing how fun and special they could have been. My attitude about how I treat people has also changed. Especially when I meet new people, I [try to have] a bright attitude instead of being scared.

Looking back, what does the military mean to you?

Serving in the military helped me realize that happiness is not something grand or impressive, but rather something trivial like being able to sleep, eat and go to wherever I want to go when I want. Looking back, I lived a very competitive and fierce life [before the military]. Usually, I have a lot of concerns, but I now wonder whether I need to have so many worries. Happiness is not that far away.

You were outside of entertainment for around two years, but your looks don’t seem to have changed much. What’s the secret?

I think I maintained my weight because of rehearsals for “Elisabeth.” While in the military, I gained a lot of weight, partly because the greatest joy for me, during that time, was eating. But because I knew I had to lose weight for the musical, I started to shed weight four months ahead of when I was scheduled to be discharged.

What did you pay particular attention to when planning your most recent concert?

The fact that I could perform again at the same venue I performed right before I went to the military made the concert very special. I worked a lot for those fans who waited for almost two years. Usually at a concert, the ratio of performing ballads and dance songs is around half. But for that concert, I spent more time staging my choreography and focused on entertaining the audience.

The tickets for “Elisabeth” have all sold out. Though this is not unusual for you, how did it feel to hear this news?

Since there was a gap in time, I naturally thought that the tickets would not sell out this easily. I thought it was natural for me to go down in [popularity] because there is no proper means to promote myself to the public. But seeing that the tickets for this show also sold out drove me to work harder to be able to show more to the audiences coming to see me.

Next year will mark your 10th year in musical theater. What do you think your life would have been like if you had not done musicals?

Most of my life revolves around musical theater. It is true that I put in a lot more effort into musicals [over the past years] since I cannot make appearances on television. But it is also true that I started to concentrate more on musicals because I like it so much. Now, I try to keep the balance between being a singer and a musical actor.

What is your favorite song from a musical?

That’s a difficult question. I would like to pick one song from every musical. But if I have to pick one, I would choose “I Am Music” from “Mozart.” It was my first musical, and my fans liked the emotions I put into the song.

It is not easy for a solo artist to maintain record sales and hold solo concerts. How are you managing such achievements?

I believe it is the virtuous cycle. I don’t think I get exhausted thanks to the gratitude I feel from my fans. They comfort me, and I want to meet their expectations. That is why I try new things and put in effort to improve the quality of my songs and concerts.

Is there anything you want to try?

I want to appear on television. I want to at least be able to promote my new songs and musicals ahead of their premiere. To most people, I am just the same person I was six years ago, and if negative articles are released, I just become a bad person without getting a chance to explain myself. This makes me feel tired and gloomy. I want to go on television to be able to talk about myself and just honestly show who I am.