SHIM JAE-WOO
The author is the New York correspondent of the JoongAng Ilbo. 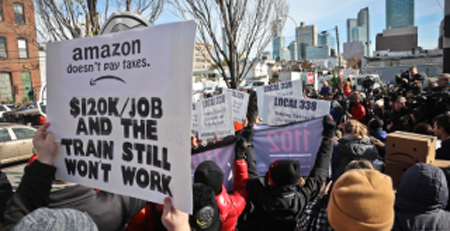 Protesters carry anti-Amazon posters during a Nov. 14 rally and press conference opposing the Amazon headquarters getting subsidies to move to the New York neighborhood of Long Island City, Queens. [AP/YONHAP]

“Imagine 25,000 people coming in and out to watch football games every day. It will hard to handle,” sighed a restaurant owner in Long Island City, where Amazon is set to move in the next few years. Along with Crystal City in Virginia, Long Island City was chosen from among 238 North American cities that applied to become the home of the second HQ of the world’s largest e-commerce company. While 25,000 new jobs could contribute to the local economy, residents are protesting the move.

While New York Gov. Andrew Cuomo and New York City Mayor Bill de Blasio welcomed the selection on November 13, the New York City Council is preparing a hearing to investigate alleged secret deals between local governments and Amazon. Three hearings are scheduled, and the first will be held at New York City Hall on Wednesday. The hearing will focus on the excessive benefits promised to Amazon, including a $3 billion state tax exemption.

Lately, retail, wholesale and department store workers’ unions are protesting in front of City Hall in Manhattan. Protesters say that such large tax exemption doesn’t make sense because around 200,000 jobs at retail outlets disappeared from 2014 to 2016 because of Amazon.

Some local residents oppose Amazon due to surging real estate prices. Since the announcement last week, apartment prices in the area went up by 30 percent compared to November 2017. As owners who put their apartments up for sale retracted their listings, the price is likely to increase even more. When real estate prices rise, leases will also go up, and small businesses in the area will also suffer.

Traffic is another concern. Long Island City already has heavy congestion because it is located between Queens and Manhattan. Queens Borough President Melinda Katz argues that Amazon needs to pay part of the cost to build a light rail between Queens and Brooklyn.

Amazon initially said that it would set up its second headquarters in a less developed region of the country, but instead chose the New York and Washington areas, where hiring is easier. The company cannot be free from the criticism that it only wanted to take incentives. The local governments of candidate cities that failed to win the bid seem to find it gratifying that Amazon is faced with such criticism.

If Amazon plans to set up an Asia-Pacific headquarters and start a bidding war among East Asian metropolitan cities, what would happen in Korea? I wonder if the Moon Jae-in administration would offer incentives to Amazon to create jobs like he promised during the campaign or refuse to give special benefits to any one company like he pledged.