In Europe it’s kimchi, but not as we know it

In Europe it’s kimchi, but not as we know it 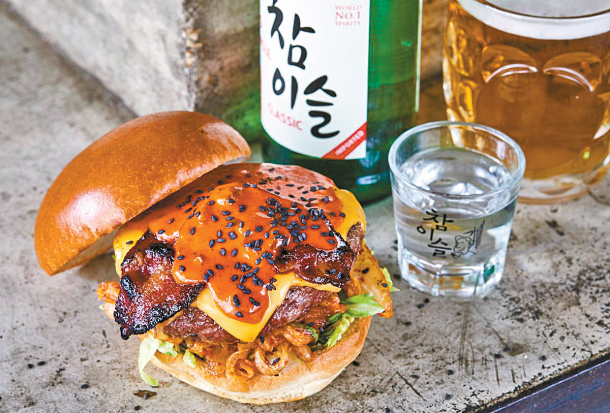 The localization of kimchi is in full swing in Europe, with dozens of restaurants there incorporating the Korean signature dish into cocktails and burgers to significant commercial success.

The World Institute of Kimchi recently conducted a survey of 94 restaurants in Europe that offered kimchi-related dishes to identify the different ways that kimchi was being incorporated into local cuisines. The five cities surveyed were London, Berlin, Madrid, Rome and Paris.

The institute found that 18.5 percent of kimchi-related dishes found in the restaurants were non-Korean, localized dishes such as tacos, burgers, sandwiches, croquettes and cocktails.

“The reason that the number of localized kimchi dishes is the highest in Britain and Germany has to do with their growing interest in kimchi’s positive health effects given their meat-based Germanic dietary culture,” read the institute report.

“In the case of France and Italy, there are only a few localized kimchi dishes because national cuisines like the Mediterranean diet have such a strong presence in those countries.”

Britain has shown a great range of localized kimchi dishes, from bloody marys to brunch sets.

Honest Burgers, a popular British burger franchise, sold a burger inspired by the Korean signature dish for a limited time this summer.

Its Korean Burger, which ended sales July, was made with beef and bulgogi BBQ bacon, and topped with chili paste burger sauce, kimchi and black sesame. The dish graced the list of “10 best burgers in London every foodie needs to try at least once” in the Daily Mirror.

Berliners have also demonstrated their affection for kimchi as a versatile ingredient. Pacifico in Berlin serves the Kimcheezy Burger, flavored with kimchi and chili pepper mayo, while Ban Ban Kitchen offers Kim Chi Fries with a topping choice of chicken, soy veggie or bulgogi beef.

“To achieve the globalization of kimchi, it’s necessary to have a strategic approach when developing kimchi-based recipes that harmonize well with the cuisines of other cultures,” said Ha Jae-ho, chairman of the World Institute of Kimchi.