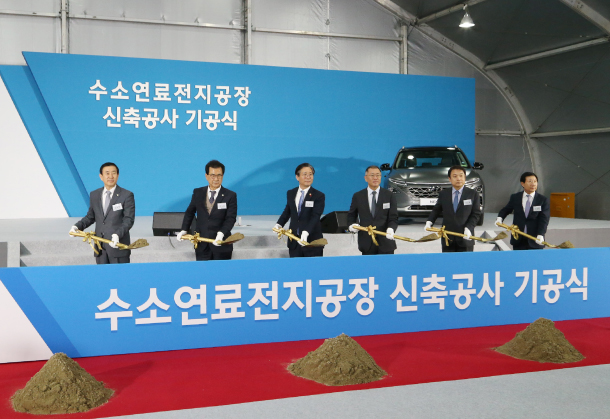 Hyundai Motor Group said it will invest 7.6 trillion won ($6.7 billion) in fuel-cell electric vehicles (FCEV) by 2030, betting big on hydrogen as the energy source for the future.

The group announced what it called its “FCEV Vision 2030” on Tuesday, promising to build production capacity of 500,000 FCEVs yearly by 2030 to take the lead in the fledgling industry. It added that the investment will generate some 51,000 new jobs by 2030.

As a first step, Hyundai Mobis, the auto parts and software affiliate of Hyundai Motor, held a groundbreaking ceremony for its second fuel cell stack factory in Chungju, North Chungcheong, on Tuesday.

If the factory is completed in 2022, Hyundai Motor Group’s production capacity for fuel cell stack will expand from its current 3,000 units per year to 40,000 units.

“Hyundai Motor Group will become the first mover in the new hydrogen society that will arrive soon,” said Chung Eui-sun, Hyundai Motor Group’s executive vice chairman, in a speech at the ceremony in Chungju on Tuesday.

Last year, it constructed a new section dedicated to making fuel cell stacks with a capacity of 3,000 units per year.

The carmaker forecasts that hydrogen will be used as an energy source in shipbuilding, railways and forklifts in the future and said it would start a business supplying fuel cell modules to other companies. The additional 200,000 units of FCEV modules that are not used in Hyundai Motor’s own FCEVs by 2030 will be sold elsewhere, the carmaker said.

“Ninety-nine percent of auto parts in FCEVs are made domestically,” Chung said, “which is why its growth will have big ripple effects on other companies related to the industry. Through co-investment with partner companies, [Hyundai Motor] will try to build new growth engine for Korea’s future car industry.”

Currently, some 130 partner companies are providing parts for fuel cell stacks made by Hyundai Mobis.

Hyundai Motor has been making hefty investments in FCEVs along with rival Toyota. It was the first carmaker in the world to make a mass-produced FCEV model in 2013 called the Tucson ix35. It launched a hydrogen-powered Nexo SUV early this year.

Since last year, the carmaker has been chairing the Hydrogen Council, a global lobbying group. Other companies represented on the council include Daimler, BMW and Air Liquide.

The Korean government plans to supply 16,000 FCEVs and build 310 FCEV charging stations by 2022. There are currently only around 10 stations available to the public in Korea.