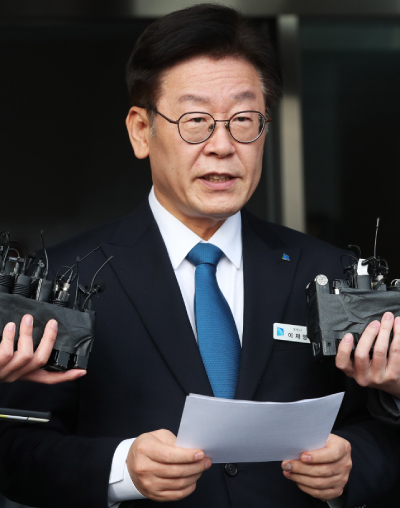 Lee’s wife, Kim Hye-kyung, however, was cleared of the defamation charges against her due to a lack of evidence.

A spokesman for the Suwon District Public Prosecutors’ Office, which investigated both the governor and his wife, said that Lee abused his power as mayor of Seongnam, Gyeonggi, to forcibly admit his older brother into a mental institution back in 2012.

Lee was also charged with two counts of publicly spreading false information. The first occurred at a candidates’ debate this May when he was running for Gyeonggi governor, in which he allegedly lied about impersonating a prosecutor in the past. Lee was found guilty of this act in 2003 and fined 1.5 million won ($1,300), yet denied this during the debate.

The second relates to exaggerations made in a campaign leaflet during the race. He boasted about the profitability of a development project he pushed through in Seongnam, where he first became mayor in 2010.

The governor’s less-than-friendly relationship with his older brother Jae-sun - who died last year - has been the subject of endless political controversy since 2014, when an audio recording of Lee spewing profanities at his brother’s wife surfaced ahead of that year’s local elections.

Lee’s older brother was institutionalized at a Seongnam mental hospital in 2012 based on a medical law that allows patients to be admitted without their consent if they are judged to be dangerous to others. What provoked controversy, however, was the fact that this occurred without a face-to-face meeting with a medical professional, which is necessary for admitting patients on psychiatric grounds.

Prosecutors say Lee used his influence as mayor of Seongnam to institutionalize his brother. This conclusion was based on interviews with over 40 witnesses who unanimously testified that Lee exerted pressure to intern his brother, whom he likely considered a political liability.

Lee now faces what will likely be a harrowing trial in court. If he receives a sentence heavier than 1 million won ($883) fine, based on current election laws, Lee will be removed as Gyeonggi governor.

Prosecutors overturned the police’s recommendation for his wife’s indictment over allegations that she operated a Twitter handle used to defame Lee’s political rivals, including President Moon Jae-in.

Just last week the situation looked bleak for Kim, who denies she ever had such a Twitter account. The police traced the account back to an email address last accessed at the governor’s home in Seongnam. Prosecutors on Tuesday said that this was insufficient as evidence to prove Kim was the handle’s operator, particularly since police raids to find the phones used for the Twitter posts came up empty handed.

Nonetheless, Lee’s own indictment could be a political death sentence. The ruling Democratic Party (DP) had been toying with the idea of expelling him from its ranks even before the prosecution indicted him.

The DP’s leadership, including chairman Lee Hae-chan, had reservations about kicking Lee out without conclusive evidence. However, a growing number of voices in the party have been arguing that it is best to sever ties with Lee, saying his numerous controversies are only serving to drain the popularity of the current administration.

Lee responded to both the indictment and the calls for him to exit the party with his usual tone of defiance, saying he was a “proud DP member” and that he would continue to do his best as governor.