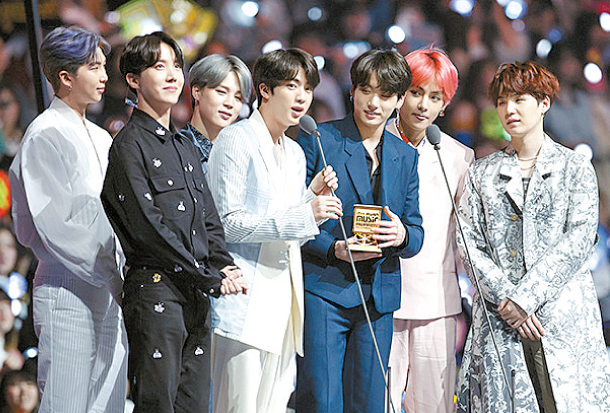 Boy band BTS was awarded the Worldwide Icon of the Year at this year’s Mnet Asian Music Awards (MAMA) held in Japan on Wednesday night. This is the third year in a row that the group has received the biggest prize at the annual ceremony.

The group received three other awards at the ceremony, including the Worldwide Fans’ Choice Top 10 award, the Favorite Music Video award for their song “IDOL” and the Favorite Male Dance Artist award.

“ARMY [the group’s fan club,] a few years ago, we were just a band that belonged to a small agency,” said member Jin while receiving the prize. “[Now,] thanks to a good opportunity, we have been able to meet our ARMY and receive this Great Prize. This prize is due to our hard work and your support. We will love you all for our lives.”

At the ceremony, the group performed their hits “Fake Love” and “Anpanman” before being given their awards.

The 2018 MAMA, in its 10th edition this year, was held in Seoul on Monday and in Japan on Wednesday. The final part of the three-part award show will be held in Hong Kong today.