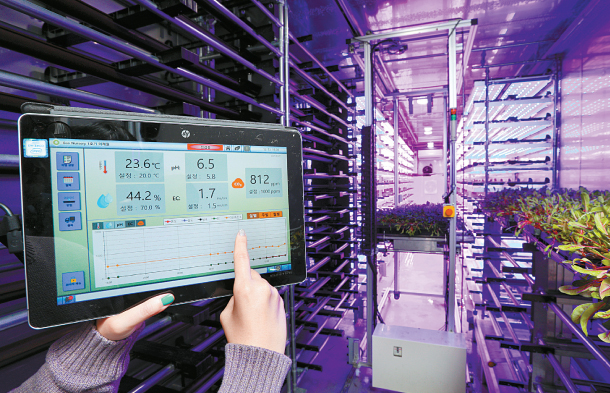 Miraewon’s container-shaped vertical farm is run by a robot that adds and removes seed trays on its own. The climate, including temperature and humidity, is automatically controlled. [LIM HYUN-DONG]

PYEONGTAEK, Gyeonggi - Miraewon, a farming company, is in an unlikely place, an ordinary industrial site in northern Pyeongtaek, Gyeonggi. But that’s because it’s a smart-farming company.

On Dec. 3, senior government officials, including the Ministry of Science and ICT’s first vice minister, gathered at Miraewon as it hosted a conference for experts as the government looks to establish research and development reform measures in search of new industries.

The company is at the forefront of smart urban farming, which utilizes technology to grow produce on vertically-stacked layers within a contained environment. Traditional methods rely on vast tracts of arable land. The fledgling smart farming sector is bringing agriculture indoors and promising high-density production without the use of chemicals.

While the company’s building seems like a manufacturing facility from the outside, the 1,160 square meters (12,486 square feet) inside are protected from external contaminants and produce 80 tons of around 20 different types of agricultural goods annually, including herbs and lettuce.

The company not only grows vegetables but also packages the produce, as, for example, salads ready to be sold on store shelves. Combining agriculture and manufacturing, the facility is a model smart farm for the future.

“We reached the break-even point two years ago,” said Kang Dae-hyun, vice president of Miraewon. “For this year, we expect to record around 42 billion won in sales.”

“We plan to expand the vertical farming facility to a size of 700 pyeong [24,908 square feet] and push out full-scale automated lines,” Kang added.

A laptop monitor with details of the controlled environment is placed at the entrance of one of Miraewon’s cutting-edge container-shaped smart farms.

The laptop displays the current temperature, humidity level, pH level and carbon dioxide level, among with other essential climate details required to maintain an ideal environment to grow vegetables.

The smart farm, which specifically grows leafy vegetables such as lettuce, requires no human intervention.

Seed sowing is automated and trays with the sowed seeds are placed under LED lighting in 10-tray shelves stacked 20 centimeters (7.87 inches) apart by mobile robots. Lettuce sprouts are grown for 15 days, and in that period, they are fed with nutrient fluid and carbon dioxide.

All humans need to do is replenish the nutrient fluid and set the climate.

“Smart farming can steadily supply vegetables through the four seasons. And because it is completely sealed from the outside, there is no need to use pesticides. We produce completely chemical-free food,” said Son Geum-joo, a researcher at Miraewon’s Agricultural Food Research Institute.

“Although the environment is limited, the farm will become price competitive with time as it will generate consistent high-density production,” Son added.

Smart urban farming is now reaching the state of industrialization, going beyond the laboratories of government-funded facilities or universities.

In addition to Miraewon, other companies in the country make use of urban farming. The list includes Agronics and Insungtec. Notable examples abroad include U.S.-based AeroFarms and Japan’s Akisai.

Urban farming is presented as a defense against the dangers of population growth and could help if food shortages are the result. The International Space Station currently operates a vertical farm for astronauts.

“Urban farming was chosen as one of the top 10 urban innovations of 2015 by the World Economic Forum,” said Seo Kyung-choon, the head of the bioscience technology division at the Ministry of Science and ICT.

“As all industries incorporate a form of intelligence and undergo a paradigm shift, urban farming, which combines biology and information and communication technologies, is currently in the spotlight as a promising new industry,” Seo added.