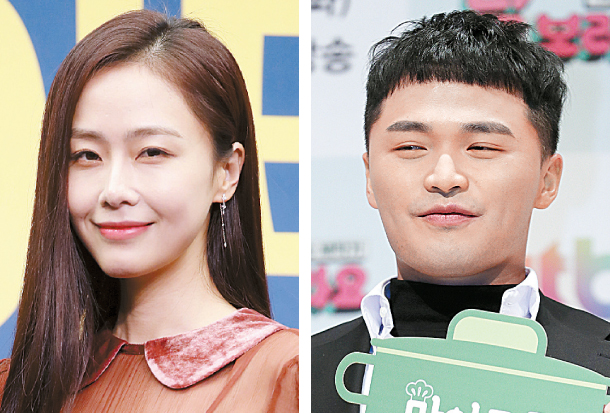 Reports made Friday said that rapper Microdot, right, and actor Hong Soo-hyun have parted ways due to the recent round of rumors surrounding the rapper.

“Their relationship started deteriorating after the rumors [surrounding Microdot’s parents], and the two eventually broke up,” said an anonymous entertainment insider. “They will be spending time apart from each other during the year-end holidays.”

The two started dating last October after they met on the set of Channel A’s variety show titled “City Fishers.”

The couple went public with their relationship this July, attracting attention from the public due to the fact that Hong was 12 years older than the 25-year-old rapper.

But in October, news broke that Microdot’s parents had pocketed a large sum of money from friends and family some 20 years ago and fled the country without paying anyone back.

When the rapper, who apologized and told the press that he will take responsibility for his parents, went AWOL without informing anyone, people began questioning whether Hong was still in love with the rapper - some going as far as sending her threats on social media and criticizing her for the rapper’s sudden disappearance.

Hong refused to answer any questions regarding Microdot when she made an appearance at a press event on Dec. 6 for the tvN reality program “Seoul Mate 2.”

Hong’s agency refused to give a clear answer on the matter, saying, “This is a private matter. We haven’t heard anything regarding their relationship.” Hong is currently on vacation abroad.