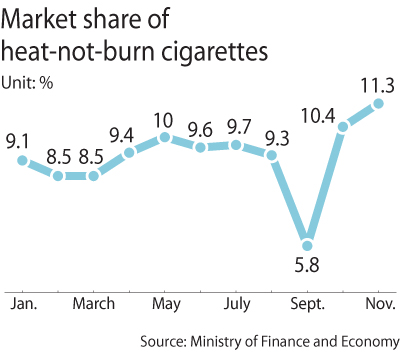 While people have been smoking less, that doesn’t mean they are necessarily quitting. Many are opting to switch to heat-not-burn cigarettes, like the IQOS from Philip Morris.

According to the Ministry of Finance and Economy on Friday, 288 million packs of cigarettes were sold last month, up 1 percent from a year ago.

Sales of cigarettes that actually burn fell, with 286 million packs changing hands, a 0.7 percent decline from the previous year. In the first 11 months of the year, the category was down 1.6 percent to 3.19 billion.

But sales of heat-not-burn e-cigarettes, like the IQOS, are rapidly rising. In November, sales were up 8.9 percent to 35 million.

The ministry said sales of the traditional cigarettes have been falling sharply since their price was increased 80 percent in 2015.

In November this year, sales were down 20 percent from November 2014.