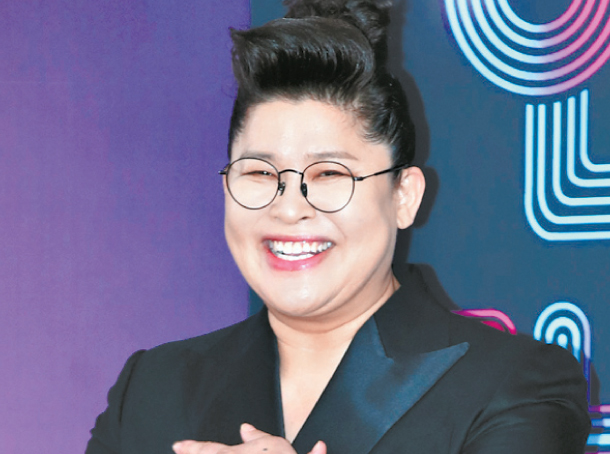 On Saturday, Lee Young-ja, 50, became the first female comedian to win the grand prize at the KBS Entertainment Awards.

Lee was honored for her role on the program, “Hello Counselor,” which invites people to share their personal concerns with a panel of hosts and guests that tries to help them solve their issues.

The public broadcasting company’s annual awards ceremony, launched in 2002, recognizes the achievements of variety and entertainment programs. Until this year, the award had been given to male entertainers - including Yoo Jae-suk and Shin Dong-yup - for 16 consecutive years.

Lee was up against six nominees for the grand prize this year, including Yoo, Shin, Lee Dong-guk and Kim Jun-ho.

“There are so many people that I feel grateful to,” said Lee in her acceptance speech at the ceremony held in Yeouido, western Seoul. “I received this award on behalf [of other female entertainers,] but I am well aware that I did not receive this for my talent.”

Lee continued, “It has been eight years since ‘Hello Counselor’ started, and I am grateful to the people who have bravely shared their deep personal stories. I also thank [the show’s co-host] Shin Dong-yup who has helped me become a better entertainer without becoming arrogant.”

Lee has also been nominated for the grand prize at MBC Entertainment Awards for her role in “Omniscient Interfering View.” The awards show is scheduled to take place on Dec. 29. She will compete against Jeon Hyun-moo, Park Na-rae and Kim Gu-ra.

Other award recipients at the KBS Entertainment Awards were “Two Days and One Night,” which won the Viewers’ Choice for Best Program for the third consecutive year, Kim Sook and Moon Hee-joon, who received the Top Excellence in Talk & Shows Award for “Battle Trip” and “Immortal Song,” as well as Lee Honey, who was given the Rookie Award in the variety division for “The Secret and Great Private Lives of Animals.”

While KBS hasn’t honored a woman with its highest prize in 16 years, other networks have not shied away from recognizing female talent. Last year, SBS awarded the four mothers who star on the program “My Ugly Duckling” with the network’s highest honor. In 2009, SBS honored Lee Hyo-ri for her role in “Family Outing” (2008-10) along with the show’s co-host Yoo. In 2001, Park Kyeong-rim was awarded the grand prize from MBC for her role in comedy drama “New Nonstop” (2000-2002).

Lee entered the entertainment world in 1991, but is just now in the prime of her career. Best known for her detailed descriptions of food, she is being particularly famous for her mukbang appearances on popular programs like Olive’s “Bob Bless You.”