Small business struggles with wages on the rise

Small business struggles with wages on the rise

A store in central Seoul looks for a new tenant on Dec. 23. Recently, the number of stores going out of business has been on the rise while the government is coming up with measures to help small businesses. [YONHAP]

Kim Hee-su, who has operated a small convenience store in Jeo-dong, central Seoul, for the past seven years, currently works 13 hours a day. After the steep rise in the minimum wage this year, the 47-year-old decided to change from three-person shifts to a two-person system to cut costs. A part-time worker takes 11-hour shifts at night in the 33-square-meter (355-square-foot) establishment.

“[I] expected sales to increase as a hotel opened nearby; however, the number of tourist customers hasn’t increased,” said Kim. “It’s manageable because it is a small store; there are large convenience stores in the area that have closed down.”

Small business owners are being pushed to the brink as the local economy remains sluggish and costs rise due to government policy measures, such as the minimum-wage increase. According to Statistics Korea on Sunday, the number of self-employed workers - largely private business owners - totaled 6.822 million in August, a decline of 36,000 from the previous year.

The number of wholesale and retail workers, who are most exposed to the local economic environment, fell by 3.6 percent compared to last year to 1.434 million, the largest fall since the figures were first recorded in 2013.

Self-employed workers have been on the decline since 2008, when they accounted for 31.8 percent of the country’s total employed workers. That figure is now 25.5 percent.

“As the local economy worsened, the weakened consumer sentiment had an influence on the reduction in the number of self-employed workers,” said Bin Hyun-joon, Statistics Korea employment statistics division director. 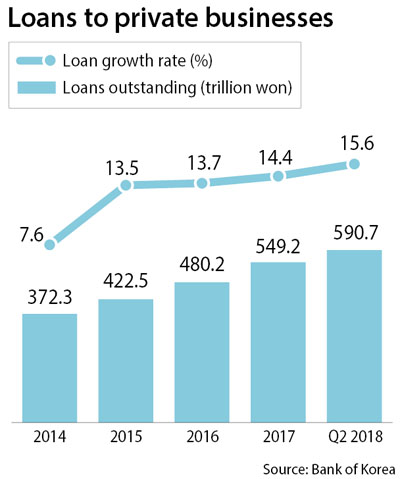 Businesses are closing due to dwindling sales.

According to an analysis of card payment records of 2.22 million stores by the Woori Finance Research Institute, average sales from January to September this year for shops in sectors that are largely operated by small private businesses decreased 0.1 percent compared to the same period last year.

This is the first time in five years that the figure has fallen.

The majority of sectors recorded negative growth, with culture and hobbies at -4.8 percent, personal services at -4.7 percent, leisure at -3.0 percent, education at -1.9 percent and accommodations at -1.3 percent.

The number of shops shutting down or temporarily closing was around 600,000 every year from 2014 to 2017. The accumulated figure this year through September has already reached 660,000.

The institute expects the annual figure to surpass 800,000.

“When considering the fact that the share of credit cards is increasing as payment methods, sluggish sales for business owners is even worse in reality,” said Kim Soo-jin, a senior researcher at the Woori Finance Research Institute. “The average income for private business owners is at around 2 million won. It has decreased with declining sales and rising labor costs, which likely led to the increase of businesses shutting down or temporarily closing.”

According to the Bank of Korea, loans outstanding to private businesses were 590.7 trillion won as of the end of the second quarter this year.

Loans to the private sector are up from banks. But loans from other institutions, such non-banking financial institutions, mutual credit companies, savings banks and credit finance companies, are rising at a much faster rate.

The sluggish economy is weighing on consumer sentiment.

The Bank of Korea’s composite consumer sentiment index last month was 96 percent, the lowest in 21 months. The figure has a direct effect on small businesses.

“There were many office worker customers before as we sell alcohol late into the night, but since the 52-hour workweek went into effect, the number of customers has decreased,” said Lim Hye-sook, a 58-year-old restaurant owner in Bukchang-dong in central Seoul.

“Sales have decreased by 30 percent in a year,” Lim added.

In Myeong-dong, central Seoul, and Gangnam District, southern Seoul, havens for private businesses, property listings are not hard to find. According to the Korea Appraisal Board, a government-funded real-estate information provider, the vacancy rate in medium and large-sized commercial buildings rose to 10.6 percent in the third quarter this year from 9.8 percent the same quarter last year. The vacancy rate for small-sized commercial buildings rose 1.5 percentage points to 5.6 percent over the same period.

With business owners facing difficulties, the government announced on Dec. 20 a plan to write off overdue debts for private business owners and create a low-interest fund of 17 trillion won.

This is the fourth plan for private businesses by the current administration. The belief is that the government’s flagship income-led policy will only properly work if the situation for small businesses improves.

“The crisis faced by small businesses is not only a policy problem but is a complex equation that considers factors such as overcompetition for small businesses and a change in the population structure,” said Jung Yeon-sung, the vice chairman of Korea Distribution Association. “The government’s response needs to change the physical hardware, but seems to have opted for a software change,” added Jung, also a business professor at Dankook University.

“Through education training and consulting, reckless ventures into starting businesses should be restricted, and there is a need to soft land a restructuring in the private business sector by providing recovery education programs for business owners who shut down their businesses to become employed workers,” he said.