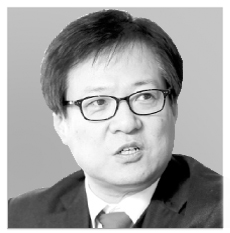 Jang Hoon
The author is a columnist of the JoongAng Ilbo and professor at Chung-Ang University.

The spread of the so-called yellow vest protests beyond France to other parts of Europe and as far as Taiwan underscores the anger and disgruntlement of people around the world.

Thousands took to the streets in not just Paris, but also in small villages of 20,000 to 30,000 inhabitants, outraged by the progressive agendas of President Emmanuel Macron, which they believed disregard the common man. The protests were named for the reflective jackets the French are required to carry in their cars in case of engine trouble.

The protesters are not just young people without jobs but people from many walks of life. The weekend protests were triggered by an online petition by Eric Drouet, a truck driver from a southern suburb of Paris, calling for cut in gas prices. He organized a car rally-cum-protest on Nov. 17 that set off a nationwide movement. 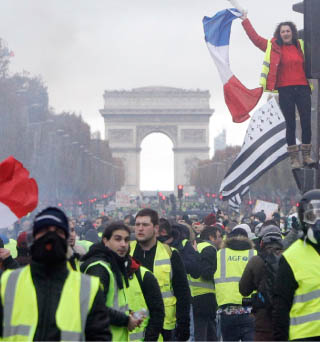 Protesters known as the yellow jackets walk down the famed Champs-?ys?s in Paris on Nov. 19 to protest a rise in fuel prices. [AP/YONHAP]

It remains a grass-roots mass movement with no central leadership. Unlike anti-government protests in the United Kingdom and United States against their leaders’ agendas, it does not involve violent clashes with law enforcement.

Various colors of rage surfaced in Korea this year. The death of a 24-year-old temporary worker, Kim Yong-kyun, who was sucked into a coal conveyor belt, aggravated the anger of the young and unemployed and the irregular workforce subjected to hazardous workplaces. The gray-haired population were forced to take their disgruntlement to chilly streets as they go largely ignored by the young generation led by K-pop stars like BTS, who have become symbols of the vibrant side of Koreans.

The greater population watches the angry demonstrations and exchanges of words by commentators and critics on TVs and rallies on the streets with dismayed silence. They cannot afford to lash out. They cannot join the protest over outsourced risky jobs or minimum wage hikes.

They have their own fights with invisible glass walls. The young and the elderly cannot join the protests because they must ready themselves for corporate or public placement tests or deal with everyday tasks to survive in uncertain times. They are already wrestling with daily struggles.

Politicians at the National Assembly have been engrossed with political wrangling and are deaf to the inner rage outside the glass walls. The government has been confident about its reading of public anger and policies intended to relieve the disgruntlement.

Politicians have been more skilled in politicizing public tragedies than trying to address them. They mourn in the most poignant language before TV cameras. The ruling party head went down to the thermal power station in Taean that killed the young worker. But that was after the dark underground worksite was sealed off.

Political dramas have little interest in the complexities and details of reality. Young workers have been killed at dangerous industrial sites mending doors in subway and conveyor belts, and yet the law restricting subcontracting of risky jobs remains unattended at the National Assembly.

A government vowing to create a society for all and leave no one behind may be more sincere about the angst among the public than politicians, but regardless of its flowery talk, the working class has been struggling and pained more this year under this government policies.

The Moon Jae-in administration has been deluded about its ways of governance and capabilities. It believed a sharp hike in the minimum wage would cure many of the problems for the poor. It accelerated minimum wage hikes because it was confident it was doing the right thing.

Forcing hikes of 16.4 percent in 2018 and 10.9 percent in 2019 without any regard to the possible impact on millions of self-employed and low-wage workers, as well as the complicated wage system in Korea, stemmed from its inflated confidence in their intelligence.

But their intelligence came from the restricted corner of politicized unions, progressive highly-educated civilians and scholars with complacent ignorance of the troubles of the real world.

The politicians in Yeouido and in the government have been deaf to the muffled outcries and rage outside the glass walls. The rage is building in dark factories and unheated basements. Politicians must open their eyes and ears before the outrage bursts and breaks these glass walls into pieces.