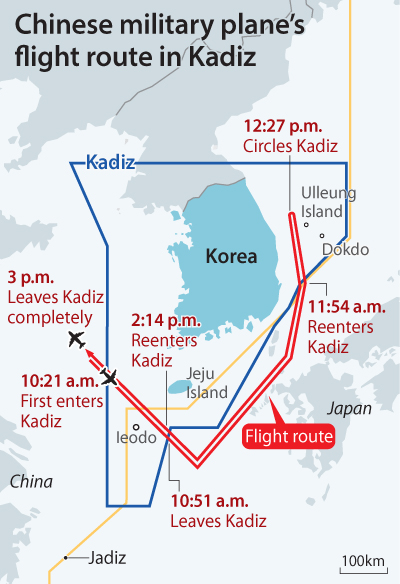 Seoul lodged a protest after a Chinese spy plane flew through Korea’s air defense identification zone (Kadiz) without notice three times over the course of five hours on Thursday.

This was the eighth time this year that a Chinese military aircraft entered the Kadiz, flying a similar route, according to the Korean Joint Chiefs of Staff (JCS).

The Joint Chiefs of Staff said that the Chinese aircraft entered the Kadiz at around 10:21 a.m. from an area near Jeju Island and exited east of Ieo Island at 10:51 a.m. toward Japan’s air defense identification zone (Jadiz).

The Chinese plane was identified as a Shaanxi Y-9JB electronic warfare and surveillance aircraft.

After flying in the Jadiz, the plane re-entered the Kadiz at 11:54 a.m. near the coast of Pohang, North Gyeongsang, and left the zone an hour later at 12:51 p.m.

The aircraft exited near Gangneung, Gangwon, 12:27 p.m. and entered the Kadiz again around 2:14 p.m. near Jeju Island before finally exiting the zone around 3 p.m.

The Korean Air Force immediately scrambled 10 fighter jets including F-15Ks from northwest of Jeju Island to track and monitor the Chinese aircraft.

It is an international custom to inform a country prior to entering its air defense identification zone (ADIZ).

The Korean Ministry of National Defense summoned a defense attache from the Chinese Embassy in Seoul to lodge a protest and requested working-level talks between the Navy and Air Force.

The Korean Ministry of Foreign Affairs likewise summoned a diplomat from the Chinese Embassy in Seoul later that afternoon, expressing “regret” over the incident and requesting that such an incident “does not happen again.”

In a statement Thursday evening, the ministry added that it is “working closely with the Defense Ministry in sharing information and responding to the entry of Chinese military aircraft in the Kadiz.”

Chinese aircraft made similar entries to the Kadiz in January, February, April, July, August, October and most recently at the end of last month.

A Chinese spy plane entered the Kadiz without notice three times on Nov. 26, flying a similar route as Thursday’s aircraft and ignoring Seoul’s repeated requests for an explanation over their military hotline.

Some analysts see the move as China’s strategic efforts to exert its influence beyond the Yellow Sea to the Korean Peninsula and the East Sea.

Military observers view the Chinese military aircraft’s repeated entries into the Kadiz as not being for reconnaissance but a part of a longer term strategy.

A military official said, “It is the same as the Chinese military marking its territory and demanding its influence to be recognized not only in the Yellow Sea but in the East Sea.”

China unilaterally proclaimed its own ADIZ in the East China Sea on Nov. 23, 2013. It overlaps areas claimed by Korea and Japan.