Three sculptors play with space, being: Exhibit brings together works by Osang Gwon, Inbai Kim and Dongwook Lee, all in their 40s

Three sculptors play with space, being: Exhibit brings together works by Osang Gwon, Inbai Kim and Dongwook Lee, all in their 40s 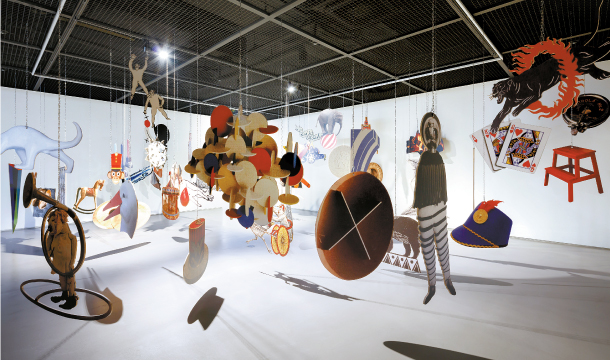 Osang Gwon, Inbai Kim and Dongwook Lee are among the most important Korean sculptors in their 40s. They are famous for works that break from common ideas about sculpture in regard to materials and use of space.

Coincidentally, they are all represented by Arario Gallery, one of Korea’s major galleries. The three recently started a group exhibition at the new branch of Arario in the Ryse Hotel near Hongdae Station, western Seoul.

The most visually-spectacular work in the exhibit is the installation “Red Shirt and Whistle, Calder’s Circus”(2018), by Gwon, 44, dubbed the pioneer of photography sculpture. In this work, various images - ranging from a cartoon drawing of a rabbit in a hat to an old photo of a dancer in an Avant-Garde Bauhaus ballet, printed on wooden panels - hang low from the ceiling. Viewers are allowed to “stroll between the images and brush past the works,” as the artist told the Korea JoongAng Daily. 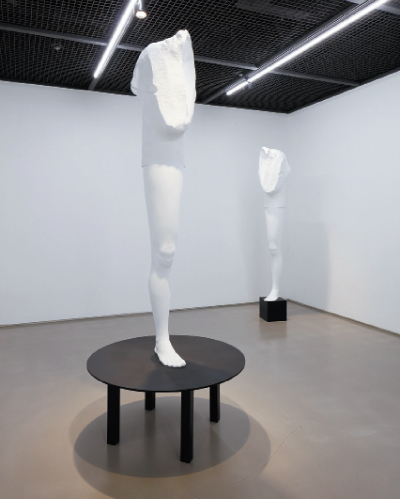 Walking through “Red Shirt” shows a kind of perspective game, evident in the way some are obviously 2-D images, while others seem 3-D from a distance, but, viewed closer, are revealed to be 2-D. This work is an evolution of Gwon’s “New Structure” series, for which the artist took 2-D photos of 3-D daily objects and made 3-D sculptures with the enlarged 2-D photos in the style of American artist Alexander Calder’s “Stabile” series.

“The new work, ‘Red Shirt,’ was also inspired by Calder,” Gwon said. “I saw a video in which Calder, in a red shirt, whistles and performs a circus with his miniature sculptures. Then I searched the word ‘circus’ on the Internet, obtained various images from the search results, and then made them into this work.”

“By amplifying the mobile’s size and inviting viewers to experience the piece in greater proximity as they wade through, the artist tries to redefine sculpture as the art of creating space,” Kang So-jung, curator of Arario, said.

Gwon has constantly explored the relations between 2-D and 3-D with his sculptures. His “Deodorant Type” series, which brought him the early fame, and some newer pieces that are on view in this exhibition, are sculptures of models made with light materials such as Styrofoam covered with numerous photographs of models, taken at different angles under various kinds of light. They are like 3-D versions of Cubist paintings.

The pieces on view are displayed on photograph sculptures of pedestals used by Constantin Brancusi and the exhibit’s title is an echo of the Romanian artist’s 1918 work “Endless Column.”

“The title pays homage to Brancusi’s ‘Endless Column,’ which became the foundation of contemporary sculpture,” Kang explained. She added the work is about “infinity” and is related to the three Korean artists’ explorations of boundary-crossing and new possibilities of sculptures.

Dongwook Lee, 42, gained fame with tiny, hyper-realistic sculptures of human figures frozen in surreal, horrifying situations, such as humans tinned instead of sardines, going against the stereotype of sculptures being big, heavy, monumental and sublime.

In this exhibition, he presents works in which tiny human figures are suffering in desolate and wild natural landscapes, which the artist made with objects he found in his daily life, such as a black plastic bag and branches fallen from trees. 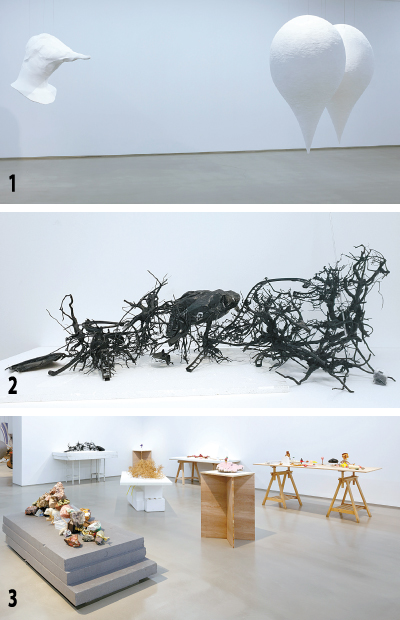 “In fact, I love and have been collecting action figures,” Lee said. “One day I thought I myself could make them better and that was the start of my tiny human figure sculptures.

“Earlier, I focused on human figures and in what situations I would put them... They were often placed in some satirical situations,” the artist continued. “Now I’m focusing on how to combine found objects and my human figures.”

Inbai Kim, 40, who has raised philosophical questions about human perception and cognizance with his half-abstract, half-figurative sculptures, focuses in this exhibit on how we can “count” things and individuals.

The work “Count” shows an ambiguous entity comprised of a small pair of feet; a large, swollen body, which look like two torsos or a pair of legs; and a bird head that looks upon these parts. The head and the body hang separately from one another and the pair of feet is on the floor, also separate from the head and the body.

So, if the artist asks the viewers to “count” the works, the viewers will be totally confused.

“Recently I had some difficulties in human relations and began to think about the relations between me and non-me and about whether they can be counted as two entities,” Kim said.


The exhibition runs through March 3. Admission is free. The gallery is closed on Mondays. Get off at Hongik University Station, line No. 2, exit 9. For details, visit www.arariogallery.com or call (02) 338-6700.