What’s next for the MLB three?

What’s next for the MLB three? 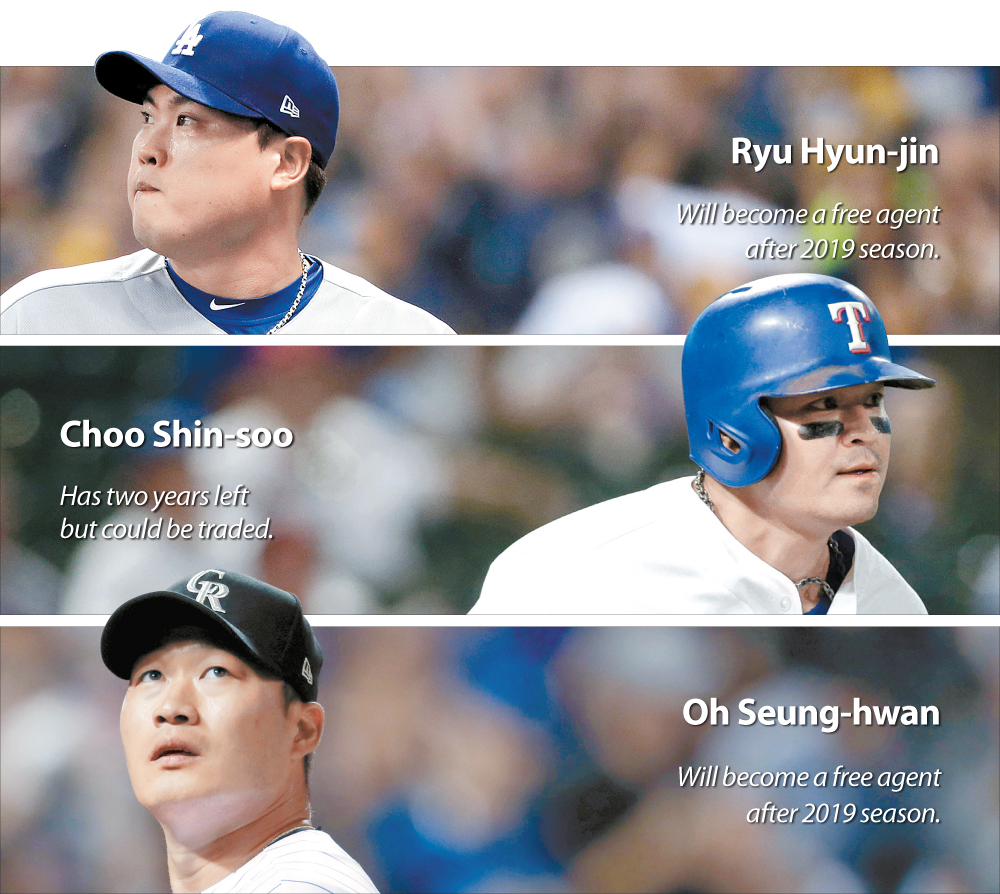 Next season will be a big one for the three Korean major leaguers - Oh Seung-hwan of the Colorado Rockies, Ryu Hyun-jin of the Los Angeles Dodgers and Choo Shin-soo of the Texas Rangers.

Depending on their performances this year, the three players might be looking for new teams for the following season.

Oh will play one more season with the Rockies this year, having earned the plus year in his 1+1 contract.

Since the end of the 2018 season, Oh has been focusing on regaining his weight. Last season, his weight dropped below 90 kilograms (198 pounds) for the first time since he turned pro given he was unable to travel with his manager, who took care of his meals due to visa issues.

Since the Rockies have to travel longer distances and advanced to the wildcard game last season, Oh lost a significant amount of weight. Over the two months since Oh returned in October, he has gone back up to 95 kilograms and will head over to Okinawa, Japan, this month to start his individual training.

“Through my experience last season, I gained confidence in pitching against batters in the major league,” Oh said.

In Oh’s rookie season in the majors, in 2016, he picked up six wins, 14 holds and 19 saves with a 1.92 ERA in 76 games to become the St. Louis Cardinals’ closer. However, compared to his rookie season, 2017 was a big disappointment for Oh who only picked up one win, seven holds and 20 saves with a 4.10 ERA. As a result, he wasn’t able to re-sign with the Cardinals last year.

Instead, he continued his majors career with the Toronto Blue Jays. Oh didn’t last long with the Blue Jays as he was traded to the Rockies in July. Despite the trade, Oh had another successful season in his third year, picking up six wins, 21 holds and three saves with a 2.63 ERA in 73 games.

Throughout his three seasons, Oh hasn’t shown much difference in the speed of his fastball, averaging between 148 to 150 kilometers (92 to 93 miles) an hour. However, during the 2017 season, Oh struggled significantly with his slider, which was considered his strength.

Oh’s confidence for the next season not only comes from his three years in the majors, but also from playing at Coors Field as his home stadium, considered a pitchers’ graveyard.

Based on his confidence, Oh is expected to play even better in 2019. If he does, Oh will receive a lot more offers from major league clubs as there aren’t that many bullpen pitchers that can keep their ERA below 3.00 for more than 70 games in one season.

But it may not be the major league clubs that Oh’s looking at.

“I’m a bit exhausted after spending five seasons in Japan and in the United States,” Oh said when he returned to Korea in October. “I feel like I want to return to the KBO while I still have the energy to help the team and pitch in front of home fans. I can’t make this decision alone.”

Even if Oh does decide to return to the KBO for the 2020 season, his statistics in the upcoming season will be more important as he will be in his late 30s. Due to this, his statistics will be the only factor that will show clubs that he is healthy.

If Oh does return to the KBO, his only option would be to play for the Samsung Lions since he was never technically a free agent in the KBO. Additionally, Oh will also have to face a 72-game ban for illegal gambling in 2016.

Ryu is also preparing for next season. Upon finishing this season, Ryu signed a contract with former LG Twins training coach Kim Yong-il for the 2019 season.

However, it won’t be easy because picking up 20 wins will only be possible if he plays through the full season, pitching about 162 innings. Last season, Ryu missed about three months of the season due to a groin injury. Ryu only pitched 82 and one third of an inning, but had an impressive 1.97 ERA in the regular season.

Once the season ended, Ryu received a qualifying offer from the Dodgers. By accepting the offer, he will make $17.9 million through the 2019 season. After the season ends, he will become a free agent once again.

“Ryu Hyun-jin’s condition is at about 90 percent now,” said Kim. “But we’re slowly bringing up the intensity level of his training.”

Although Ryu had a successful 2018 season statistically, over the past three seasons he has struggled with injuries. In May 2015, Ryu’s left shoulder underwent surgery. In the last two seasons, he has regularly missed playing time due to minor injuries.

Since 2019 will be his third season after the surgery, it is likely that Ryu will be in a position to sign a bigger contract in the majors.

Although Choo still has two more years remaining with the Rangers, once the season ended, there were rumors that he could be traded. Since the Rangers finished last in the American League West, it is likely that the team will look to restructure its roster. Since there are only $42 million remaining in his salary, he has now become a more flexible option for other clubs to sign.

Choo is still considered an attractive player in the majors as he has showed great on-base percentage and slugging percentage throughout 2018. With a swing change, Choo had a great first half of the season, hitting 18 home runs in 90 games. In the second half he finished with a disappointing three home runs in 56 games.

“I changed my batting form because I wanted to be better,” Choo said. “In the new year, I will bat with my changed swing. But I’ll lift my right leg a little leg less when transferring my weight.”