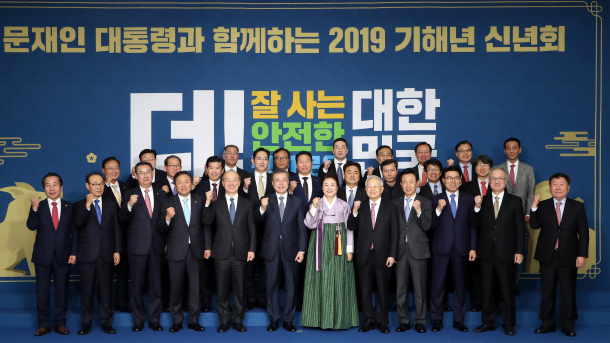 President Moon Jae-in devoted nearly all of his New Year’s address on Wednesday promising a brighter future for employers and employees alike, vowing to make 2019 the year when members of the general public can personally feel the positive effects of his economic policies.

The speech was made in front of some 300 guests, mostly from economic and political circles, at the Korea Federation of Small and Medium Businesses in Yeouido, western Seoul. It was the first time that a presidential New Year’s event was held there; most events in the past were held at the Blue House in central Seoul. In regard to the venue, Moon said in his speech that he hoped small and mid-sized companies, as well as mom and pop store owners, see their businesses flourish this year.

Without directly acknowledging South Korea’s sluggish economy, Moon said the country was now facing a “serious challenge” and that low economic growth was a chronic issue “every administration” normally goes through.

Moon made no mention of his controversial income-led growth policy, but stressed numerous times in his speech that “innovative growth” was key to building a stronger economy.

Moon’s New Year’s address for 2019 was a far cry from his first one twelve months earlier, when the former human rights lawyer who replaced Park Geun-hye in a snap election in May 2017 mostly emphasized his intention to eradicate jeokpye, or “deep-rooted evils,” from society and build a fair, righteous country.

His focus on the domestic economy in this year’s speech was seen by many as a recognition that his approval ratings are plummeting because of the economy. In the latest Realmeter poll published last Monday, Moon’s support was 45.9 percent, lower than his disapproval rate, which stood at 49.7 percent.

Poll results showed that Moon was losing popularity among people in the mid-income bracket, blue-collar workers, entrepreneurs, office workers, people aged 30 years or above and residents of Incheon, Gyeonggi, the liberal provinces of North and South Jeolla and conservative Busan, Ulsan and South Gyeongsang. Realmeter said the precipitous fall of Moon’s approval ratings was the result of a bad economy and the whistle-blowing surveillance scandal that’s been beleaguering the Blue House for weeks.

Opposition parties have slammed the Moon Blue House for its income-led growth policy, but if Moon gave any hint about the policy’s fate on Wednesday, it was that it’s not being given up on yet.

Income-led growth is supposed to be a way of boosting the domestic economy by raising wages of low-income workers and inducing them to spend more. Reality check: Analysts say the initiative cost hundreds of thousands of jobs last year and warned Moon to slam on the breaks.

“It takes a long time to change the basis and frame of an economic policy,” Moon said in his New Year’s address Wednesday, “and controversy is inevitable. [People] might feel afraid because it’s a path they’ve never taken.”

“This path of changing our economy is a path that we have to take no matter what,” he said. Moon said he would “wait” until more people understand and accept his economic views.

Moon also said he would try to shape a “favorable environment” for companies to make investments, continuing that economic development and the creation of jobs eventually come down to that. For that to work, Moon vowed to support corporate investments by introducing a so-called regulatory sandbox system for new industries, enabling companies to try out their new technologies and services in the market without regulations for a certain period to boost innovation.

“All industrial fields need innovation,” said Moon. “Innovation adds dynamism to the economy, and that can open a new breakthrough for overcoming low economic growth.”

North Korea wasn’t cited a single time in the speech, but Moon said an era of peace and prosperity will bloom on the Korean Peninsula if complete denuclearization and permanent peace are established.

To the north, South Korean railways will be connected with those in Russia and Europe, and to the south, a “community of peace and prosperity” will be built with India and Southeast Asian countries.