Having dominated the KLPGA Tour in her first three seasons, Lee Jeong-eun will now start a new career on the LPGA Tour. 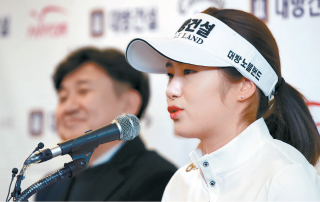 Lee Jeong-eun speaks during a press conference in Seoul on Thursday ahead of her rookie season on the LPGA Tour. [YONHAP]

Lee immediately made her presence known when she made her KLPGA debut in 2016, winning the Rookie of the Year award. Then she reached even greater heights in 2017, capturing four titles en route to earning Player of the Year honors and finishing first in both money and scoring average.

Last year, Lee split her time between the Korean tour and the U.S. tour while still defending her KLPGA titles in both money and scoring averages. To finish off her season, Lee won the LPGA Tour’s Qualifying series to earn her ticket on the Tour.

Mostly on the merit of her KLPGA performances, Lee is already No. 19 in the world rankings.

Although she has won six KLPGA Tour titles in her career, she is not currently thinking about winning a title on the LPGA Tour this year. Lee won the KLPGA Tour’s Rookie of the Year award without winning a single tournament in her first year.

“Rather than setting a goal for a title, I think I want to focus on adjusting [to the LPGA Tour],” Lee said. “I think a lot of the fans are curious as to whether I’ll be able to be the fifth straight Korean to win the Rookie of the Year award. So rather than a win, my goal is the rookie title.”

Although she doesn’t have a specific tournament in mind that she’d really like to win this year, Lee hopes to see a good result at the upcoming U.S. Women’s Open as she has played the tournament for the past two seasons.

“Since it’ll be the third time playing this year, I think it’ll be nice to play well in that tournament,” Lee said.

As most of the courses that she’ll play in this year will be new, Lee said she will take a lot of pictures of the course so she could familiarize herself before the tournament. To help Lee make a smoother transition onto the LPGA Tour, she also hired a 20-year veteran caddie who used to caddie for Charley Hull of England and Yoo Sun-young.

Unlike many of her contemporaries, who retire in their mid-30s, Lee is hoping to retire when she is 30.

Until then, she hopes to be remembered as a consistent player. To do so, Lee will focus on her shots, playing in windy conditions and putting.

“I missed a cut at the KPMG Women’s PGA Championship before,” Lee said. “The course was difficult and I felt that I didn’t have enough shots that I can hit against strong wind. When I played at Q School, there were a lot of players that hit further than me. Since I’m not a long hitter, I need to improve my wedge shots, 100 yards and in to give myself more birdie opportunities to be a more competitive player.”

On Jan. 15, she’ll head to Thailand for offseason training and will start the season in Australia at the ISPS Handa Women’s Australian Open.