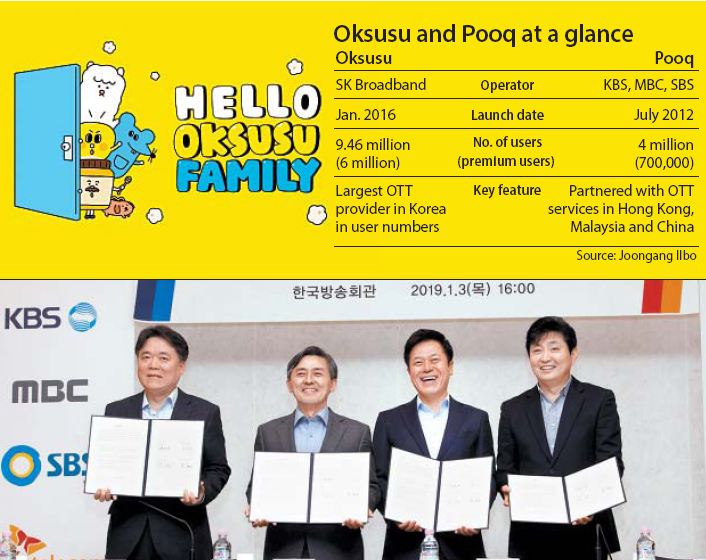 SK Telecom is teaming up with three major broadcasters to launch a new video content service in a bid to challenge the popularity of foreign services like Netflix.

On Thursday, SK Telecom and broadcasters KBS, MBC and SBS signed an MOU to combine their current over-the-top (OTT) media service businesses and launch a new and improved service by the first half of this year. OTT refers to content that is delivered directly to users over the internet without going through intermediaries like television.

The four companies will also establish a joint venture that combines the OTT operations of each party. SK Telecom CEO and President Park Jung-ho said he is seeking around 200 billion won ($177.9 million) in investment for the new firm.

SK Telecom’s subsidiary SK Broadband currently operates Oksusu, a television and movie platform released in 2016. The three broadcasters have Pooq, a joint venture that MBC and SBS both have a 40 percent stake in, while KBS holds 20 percent.

Videos from over 70 channels are available on Pooq, including drama series from the 1990s and early 2000s.

All four companies are expected to benefit from the partnership. Pooq has already established ties with Southeast Asian companies, having partners in Hong Kong’s Viu, Malaysia’s iflix and China’s iQiyi.

During the MOU signing, SK Telecom CEO Park said he hoped to see the new strengthened service launch in Southeast Asia by June.

In return, the three TV channels will have access to SK Telecom’s financial resources, which can be invested in original content production.

The partnership is seen as an effort by the domestic companies to combine forces to fend off growing foreign competition, especially that posed by Netflix.

Oksusu has 9.46 million registered users while Pooq has 3.7 million. Netflix is estimated to have around 900,000 domestic registered accounts, still trailing far behind the local companies.

These figures only tell half the story, however.

While Oksusu is the No. 1 OTT service in Korea in the number of accounts, its number of monthly active users is only estimated to be two-thirds of registered users. OTT services from competing mobile carriers like KT’s Olleh TV and LG U+’s Video Portal are also catching up quickly in total users.

Netflix, on the other hand, saw tremendous growth in the three years it has been operating in Korea.

During the same period, the time that Oksusu and Pooq users spent on the apps increased less than twofold.

Users spent a total of around 600 million minutes a month on both apps as of last September.

Experts believe that the content budget is largely to explain for the differences in growth.

Netflix is estimated to have spent around $8 billion on content production and licensing last year. Oksusu spent only around 10 billion won in content investment, however, a fraction of Netflix levels.

“Through this partnership, Korean OTT service providers can strengthen the competitiveness of their content, which has been their weakest point,” said Jung Ji-soo, an analyst at Meritz Securities. “[The companies’] goal of becoming Korea’s Netflix will also help in energizing the domestic media ecosystem.”