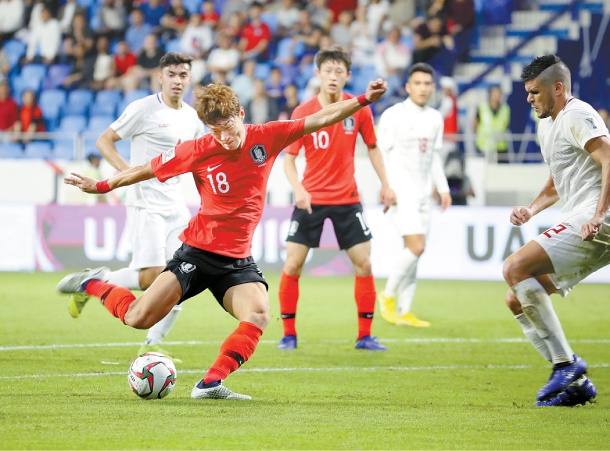 Hwang Ui-jo, left, winds up for a shot against the Philippines at the AFC Asian Cup at Al Maktoum Stadium in Dubai, the United Arab Emirates (UAE), on Monday. [YONHAP]

Last year’s Korean footballer of the year Hwang Ui-jo proved that his hot streak isn’t over, leading Korea to a 1-0 win against the Philippines at the Asian Football Confederation (AFC) Asian Cup on Monday.

Korean football fans were hoping for a big win in the opening match, but had to settle with the 1-0 win at Al Maktoum Stadium in Dubai, the United Arab Emirates (UAE).

Despite the slim lead, coach Paulo Bento still walked away from his first official tournament match with the Taeguk Warriors with three points. Bento assigned Kim Seung-gyu as the team’s starting goalkeeper. Although Jo Hyeon-woo emerged as an unlikely favorite at the World Cup, Bento has consistently favored Kim since he took the helm in August.

Against the Philippines’ defensive 5-4-1 formation, Korea struggled to keep their scoring opportunities alive throughout the match, with shot attempts continuously blocked by the Philippines. After a scoreless first half, Korea finally broke the deadlock in the 67th minute.

Once again, Hwang, assisted by Lee Chung-yong, was Korea’s problem solver. In 2018, Hwang scored a total of 33 goals throughout the year, becoming the KFA Player of the Year.

“We managed to find some room after Hwang Ui-jo’s goal and created opportunities to score more,” Bento was quoted as saying on Yonhap. “We earned an important victory. Ultimately, how we play will be more important than the opponents’ strategies. And our approach won’t change from opponent to opponent. We’ll have to come up with ways to create space against defensive teams.”

Although Korea eventually won the match, the team showed some room for improvement. The players struggled with accuracy - due to the defensive formation the Philippines adopted, Korea had a disappointing record of 31.3 percent in shooting accuracy with only five of 16 shots on target. Pass accuracy was a different story - 90 percent of Korea’s passes were on target.

Korea is now ranked second in Group C with three points, tied with China in points, but one goal behind in goal difference. Three points is still a strong start, taking Korea one step closer to their first Asian Cup title since 1960.

Adding to Korea’s weakness on the field, Bento and his coaching staff will also have to deal with an injury and yellow card accumulation. Against the 116th ranked team, Korea was given three yellow cards.

In the 24th minute, Lee Yong received the first yellow card. Jung Woo-young picked up yet another in the 52nd minute, followed by Kim Jin-su in the 76th minute.

As the AFC Asian Cup has an expanded field of 24 teams this year, a round of 16 has been added to the format. Due to this, yellow cards will be accumulated until the round of 16 matches. If a player has two yellow cards then they will not be able to play in the quarterfinal matches.

As Korea’s three starting defenders all received yellow cards, their absence in the quarterfinals could be critical.

Despite the negatives, Bento is not overly worried about the yellow cards.

“We can’t worry about players with yellow cards,” Bento was quoted as saying. “We have to get ready for our next match. We have to get three points against Kyrgyzstan to make it out of the group stage with ease.”

In addition to the yellow cards, midfielder Ki Sung-yueng was also injured during the match. Ki left the pitch in the 58th minute with an apparent injury. Once Ki left, Hwang In-beom was substituted for the remaining match.

“There’s minor damage to Ki’s right hamstring,” the KFA said. “He needs at least a week of treatment. Our medical team will closely monitor his injury.”

Korea’s win against Kyrgyzstan is a must in order for them to top the league standing as they face China in the final group game.

Following their second match, Korea will finish their group stage against China next Wednesday at 10:30 p.m. Son Heung-min will finally join the national team for that match.

“He can break down the opponents in front of the net, and I hope he’ll be able to help the team in great condition starting in the China match,” Bento was quoted as saying. “We want to accomplish our first goal of getting past the group stage without Son in the second match.”

If Korea finishes at the top of Group C, the team will be assigned in an easier bracket as they’ll likely be able to avoid teams like Iran, Japan and defending champion Australia until the semifinals.