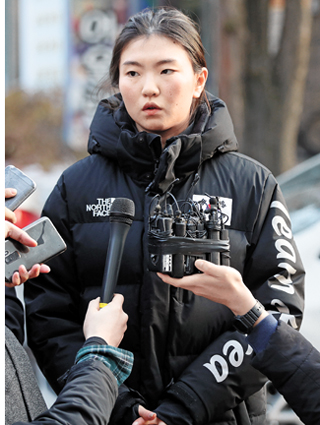 Elite short track skater Shim accused Cho Jae-beom of raping her multiple times from when she was 17 years old in 2014 until two months before the PyeongChang Winter Olympics kicked off in 2018.

“Shim Suk-hee revealed that not only was she physically assaulted, she was also raped by her former coach Cho Jae-beom,” Shim’s law firm Shin & Kim said in a statement. “After much consideration, Shim decided to file an additional complaint against Cho.”

Shim decided to file the second complaint after receiving a letter from a fan saying how inspired she was by Shim’s performance at the Olympics despite the terrible incidents she had been through.

“Since she thought that there shouldn’t be any more victims in the future, she took the courage to reveal this case with the help of her family and close acquaintances,” said the Shin & Kim statement.

The law firm added that Shim had been hesitant to speak up over the past four years since she was afraid the incident would affect her career. Cho is accused of using his authority as a coach to threaten Shim and ensure her silence.

“This is a grave crime that our society should not overlook,” Shim’s lawyer Im Sang-hyeok told AFP. “Shim kept it all to herself in fear of the potential stigma she could face as a woman and [the] impact on her family, as well as reprisals by Cho”.

Cho worked as Shim’s coach since she was in elementary school. In January 2018, a month before the PyeongChang Olympics, Cho physically assaulted Shim at the National Training Centre in North Chungcheong.

Cho received a lifetime ban from the Korea Skating Union that month, but little was done to stop him working. Before he appeared at the Gyeonggi Nambu Provincial Police Agency in Suwon in June, Cho was reportedly a coach in China.

In September, 2018, Cho was given a 10-month prison term for physically assaulting Shim and three other skaters, between 2011 and January 2018. The sentence was handed down before the rape accusations were revealed.

Cho appealed the decision and Shim was forced to testify against him in court on Dec. 17. The final hearing on Cho’s appeal will be held on Jan. 14. Shim accused Cho of rape after her Dec. 17 court appearance.

Shim also stated that it continued before and after the international events, when the athletes started concentrated training.

“Over the time, Shim had been agonizing [about the rape] without being able to tell her family about it,” said the statement. “When she saw Cho appealing at the court, Shim Suk-hee suffered even more.”

Shim is one of the biggest short track speed skating stars in the world, with two gold Olympic medals, one silver and a bronze.

At the recent PyeongChang Winter Olympics, which was only weeks after Shim was hospitalized after being assaulted, Shim led the Korean women’s short track team to win their second straight gold medal in the women’s 3,000-meter relay.

“We apologize to athletes, their families and people in Korea for not preventing such an incident and failing to protect athletes,” Roh was quoted as saying on Yonhap. “It proved that our current system and measures were not effective. We will overhaul and review all existing rules from the start.”

Roh announced that the Sports Ministry will strengthen their measures. Under the current discipline code, only those who committed rape or other types of sexual assault are permanently banned. The ministry said those who are convicted of severe sexual harassment and abuse can now also be banned.

“We’ll be making our measures from a regular citizen’s point of view, not from the sports community’s view,” Roh was quoted as saying. “I’ve emphasized this many times, but some irregularities have become customary in the sports community, so this cleaning process may take a long time.”