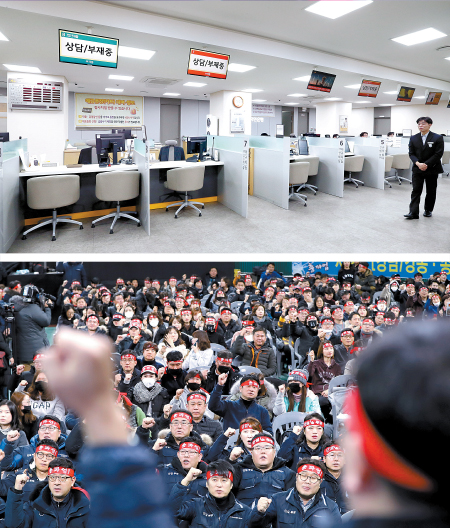 Top; KB Kookmin Bank’s Namdaemun branch in central Seoul opened with fewer staff without issue on Tuesday. Above; Unionized workers attend a ceremony to mark the beginning of the strike at Jamsil Students’ Stadium in southern Seoul the same day. [LIM HYUN-DONG, NEWS 1]

Two out of five bank teller windows at KB Kookmin Bank’s Noryangjin branch in southwestern Seoul were closed due to the bank’s nationwide strike on Tuesday.

With more than 5,000 workers joining the walkout, hundreds of branches were short-staffed and only handled limited tasks.

The strike by the country’s largest bank, however, inadvertently revealed the relative irrelevance of a human workforce in the banking industry.

The three remaining bank tellers at the Noryangjin branch - like other outlets with fewer workers - appeared sufficient to cope with a handful of visitors there as more people turn to mobile and online platforms for banking services.

“There are not many visitors, unless they are seniors,” said a worker at the branch. ”Most customers use mobile banking services.”

KB Kookmin Bank said that about 86 percent of transactions are processed by internet and mobile mediums.

Lee Min-joo, a 29-year old user of the bank, said that she didn’t even know that KB was striking.

Despite the lack of staff, all 1,058 branches remained open on Tuesday. KB Kookmin designated 411 branches as central outlets so that more complex, large-scale services such as corporate financing and mortgage loans could still take place.

KB Kookmin Bank’s labor union decided to strike for the first time in 19 years due to a dispute over bonuses and wage system reforms.

The labor union estimated the number of participants at nearly 10,000, while management put it at 5,500.

As the two parties are still at odds on major issues, the union plans to go on a second round of walkout on Jan. 31 through Feb. 2.

The planned collective action will likely have a greater impact on customers because it is planned right before Lunar New Year’s holiday, which runs from Feb. 4 to 6.

A flood of people tend to withdraw large sums of money for the holiday to give as gifts to relatives.

The bank’s management made a concession on bonuses, but the two sides remain at odds over the company’s wage system.

Hur Yin, head of the bank, announced late Monday that management has agreed to raise the year-end bonus ratio to that proposed by the union, but still remains cautious about other areas of conflict including the seniority wage system.

The chief said that this year’s bonus will be equivalent to last year’s, at 300 percent of basic monthly wages, higher than the initially proposed 250 percent.

A major issue still at stake concerns when the bank will implement a measure called the wage peak system that involves a gradual reduction in salary when senior employees pass a certain age. The age of implementation is contested.

The company and its union also don’t see eye to eye over an expansion of a wage system that caps wage increases if a worker keeps on failing to be promoted.

The union said that the system should be abolished, while management hopes to extend it.