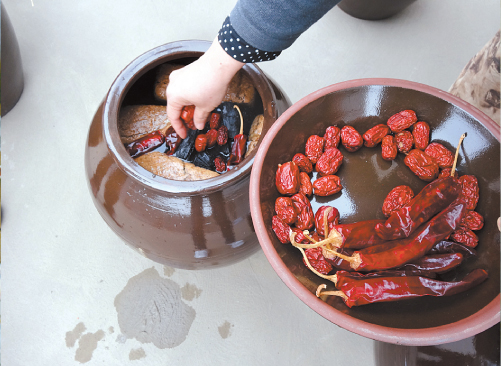 Jang is a Korean word that refers to sauce, and those who are familiar with Korean food will know that the word is commonly used to describe various Korean sauces and pastes like gochujang (hot pepper paste), doenjang (soybean paste), ganjang (soy sauce) and so on. Jang is the root of most Korean cuisines.

According to the administration, Jang-making is not about merely making sauce using beans as a base, but an intrinsic culture that includes preparing all the raw ingredients and waiting for them to ferment.

“Korea’s Jang-making culture began from the ancient times and continues to today, while its techniques get handed down generation after generation,” said an administration official, explaining the reason behind it being designated an Intangible Cultural Heritage.

The earliest record of Koreans making jang dates back to the Three Kingdoms Period (57 B.C.-A.D.668). During the Joseon Dynasty (1392-1910), there was a separate storage facility known as janggo to store all the jars filled with jang and a court lady was responsible for making and managing all the jang that was used in the food served to the royal family.

Other Asian countries, like China and Japan, also make jang. Yet, experts point out that the Korean method of making jang is unique since it has been developed from cultivating beans, making maeju (fermented soybean lumps), making jang, maturing them and then fermenting them. Moreover, creating two different jang - doenjang and ganjang - from one maeju, as well as using leftover bean scraps to make next year’s jang, are also unique to Korea.