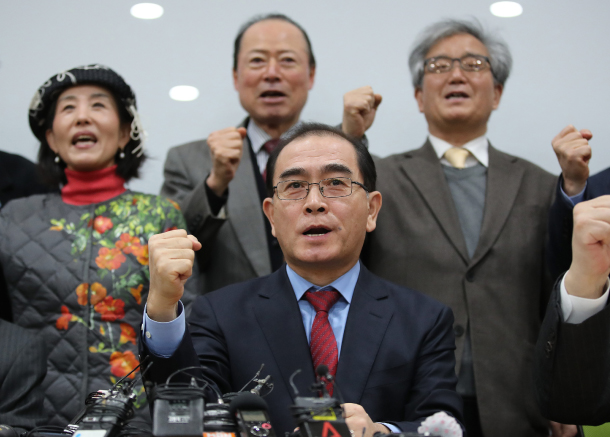 Thae Yong-ho, the former North Korean deputy ambassador in London who defected to South Korea in August 2016, urged local authorities Wednesday to make sure the North Korean diplomat who disappeared in Rome was safe - and to try to bring him to Seoul, even if that angers Pyongyang.

Thae, who has become a highly vocal critic of North Korean leader Kim Jong-un, said in a press conference in central Seoul that he was “terribly worried” that Jo Song-gil and his family might not be able to freely choose where they seek asylum due to the “current relationships between South and North Korea, and also the United States and North Korea.”

Jo, the former acting ambassador of North Korea to Italy, disappeared along with his wife in early November. The most recent news concerning Jo came from La Repubblica, an Italian newspaper, which reported last Friday that Jo was seeking entry to the United States and is currently under the protection of Italian intelligence.

Because of the rapprochement between North Korea, South Korea and the United States, there may be pressure on both Seoul and Washington not to give asylum to Jo out of fear that it might upset denuclearization negotiations. Pyongyang describes defectors as “human scum” in its state media and may take issue with Seoul or Washington if either accepts to take Jo in.

Last year, when Seoul was eager to hold a reunion of families separated by the 1950-53 Korean War, Pyongyang said the South Korean government had to repatriate 12 North Korean restaurant workers who made their way to the South in April 2016 first. The North claimed they were kidnapped by the South. Seoul said they had defected of their free will and refused to send them back. The reunions were eventually held, but that issue could have derailed them.

Thae, who quit his job at a state-backed intelligence institute last year to be able to more freely comment on his homeland and its dictatorship, said Wednesday that Seoul wasn’t doing enough to protect Jo. Thae recently launched a civic group to welcome Jo to Seoul and vowed to protect his former colleague in case he was in danger.

“When you’re living abroad,” said Thae, “you can’t tell who’s from the National Intelligence Service [South Korea’s equivalent to the Central Intelligence Agency] or who’s from the South Korean government, or whether that person’s a spy. Unlike what some people may surmise, [a North Korean diplomat who wishes to defect] can’t leak [their] defection route to anyone in advance.”

The defection process for a diplomat usually begins with the diplomat informing the host country that they wish to seek asylum, according to Thae. In Jo’s case, Jo must have told the Italian government, which, in turn, would have asked him which country he wished to make his new home. Jo would have then waited for a response from that third country.

Thae said that the waiting process is a painful time because North Korean envoys don’t know how long they have before officials from Pyongyang catch on and send someone to arrest them.

“If the Italian government isn’t protecting him now, Acting Ambassador Jo must be in a very dangerous situation,” Thae said.

Thae said he would respect Jo’s decision if he seeks asylum in the United States, as some Italian media reported, and urged Washington to immediately accept him in the spirit of humanitarianism and as prescribed in international law.