Moon urges Pyongyang to do more to denuclearize

Moon urges Pyongyang to do more to denuclearize 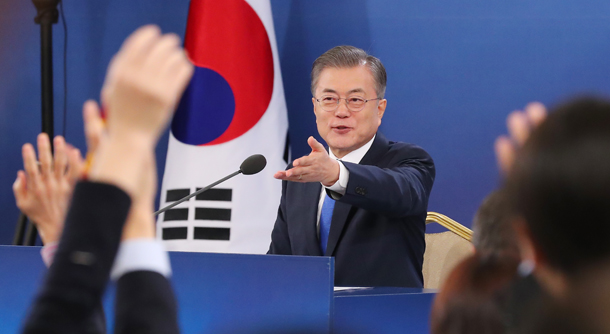 South Korean President Moon Jae-in said Thursday that the path to peace on the Korean Peninsula will "speed up even more" in 2019 and urged Pyongyang to move "more aggressively" toward denuclearization.

Moon spoke at a New Year's press conference at the Blue House that was attended by some 180 reporters from the domestic and foreign press. The briefing lasted about two hours and ended at noon, around the time North Korean leader Kim Jong-un was expected to arrive in Pyongyang after a trip to Beijing to meet Chinese President Xi Jinping.

"The second North Korea-United States summit, to take place soon, and a reciprocal visit to Seoul by Chairman Kim Jong-un of North Korea will be other turning points that will firmly solidify peace on the Korean Peninsula," Moon said in a prepared opening speech. "We will not loosen our guard until the promise to denuclearize the peninsula is kept and peace is fully institutionalized."

When later asked what substantial steps toward denuclearization he wished to see from North Korea, Moon said Pyongyang could scrap an intercontinental ballistic missile or an intermediate-range ballistic missile, their production lines, or even a nuclear plant.

And if the United States offers reciprocal rewards for such actions, Moon posited, the North can then submit an inventory of their nuclear arsenal and facilities, and finally move on to complete denuclearization.

A second U.S.-North Korea summit should be crucial, Moon added, for the two countries to discuss steps they could simultaneously take.

Moon expressed hope for economic cooperation with Pyongyang, saying that peace with North Korea can "drive economic growth" and that the connection of railways and roads between the two Koreas will help find "new breakthroughs" for the South Korean economy.

Moon said he "welcomes" Kim's stated desire to re-open the Kaesong Industrial Complex and Mount Kumgang tours without any preconditions, referring to the North Korean leader's New Year's address on Jan. 1. Moon continued that the South will cooperate with the international society, including the United States, to "resolve the remaining issues such as international sanctions as soon as possible."

Asked whether he responded to a New Year's greetings letter, which the Blue House announced Moon received from Kim Jong-un on Dec. 30, Moon said he did write back but refused to elaborate, citing diplomatic protocol. Moon only said he hoped the letters will lead to "more speedy progress" in the improvement of inter-Korean relations and denuclearization.

Moon said he thought Kim's visit this week to China will have "very positive" effects on the second North Korea-U.S. summit, which is in the works. He said he looked forward to hearing that both countries will soon hold high-level discussions to hammer our specifics for Kim's second face-to-face meeting with U.S. President Donald Trump.

Moon said he was sure Kim will follow up on his promise to visit Seoul and become the first North Korean leader to tour the South Korean capital, but said the visit "could be held more smoothly" if he came after his second summit with Trump. It was the first time Moon has given any hint that Kim's visit to Seoul might come after the second Trump-Kim meeting.

In regard to South Korea-Japan relations, Moon urged the Japanese government to show "more modesty" on the crimes it committed against Korea when it colonized the peninsula from 1910 to 1945 and accused Japanese leaders and lawmakers of trying to "politicize" the issue and turn it into a "controversy," which the Blue House chief said was "not a wise attitude."

Moon said he thought both countries have to "combine their wisdom" to truly heal the pain of Korean victims and said that politicizing that issue of compensation for Koreans forced into labor during World War II would only hinder the two countries from moving forward in their bilateral ties.