Photographer finds beauty in vestiges of time: Koo Bohnchang has long been interested in traces of history

Photographer finds beauty in vestiges of time: Koo Bohnchang has long been interested in traces of history 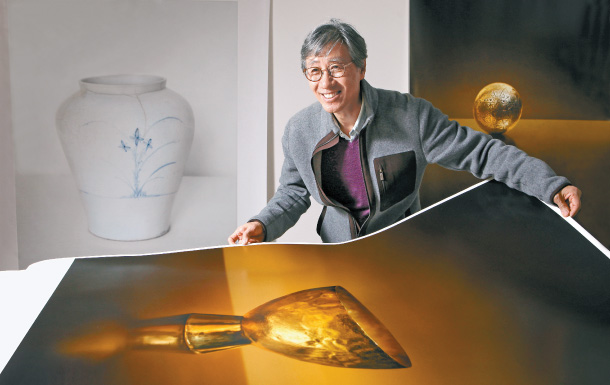 The renowned photographer Koo Bohnchang shows a photo from his new “Gold” series at his studio. [PARK SANG-MOON]

SEONGNAM, Gyeonggi - White porcelains from Korea’s Joseon period (1392-1910), old figure-eight-shaped boxes from France that once carried epaulettes and dusty plaster walls with many small cracks: these might seem to have no relation with one another, but they do have something in common. These things have each been subjects of renowned Korean photographer Koo Bohnchang, 65, who has been fascinated by the traces of unknown people who lived long ago and the vestiges of time that remain.

“I have been always interested in time, disappearance and existence,” the artist said in an interview with the Korea JoongAng Daily earlier this month.

Now, the photos of the new subjects that have captivated Koo over the past few years are on display at his solo show that runs through Feb. 17 at Kukje Gallery’s new space in Busan. The exhibit features six pieces from his latest photo series “Blue-and-white Porcelain Jar” (2014-), along with nine pieces from his internationally-acclaimed “Vessel” series (2004-). Additionally, in a parlor of the gallery hang two small photos of a golden object - a teaser for the new “Gold” series he is working on.

Koo’s “Vessel” series, which capture pure white Joseon-era porcelains scattered in museums around the world, looks very different from the photos of the same objects in museum catalogs. The jars, bottles or bowls in the series, which are nearly free of gloss and shadows under delicate lighting, have less materiality and more spirituality. Slightly blurry, each photo gives the impression of a calm, meditative painting, but subtle cracks and stains on the white porcelain are easy to spot.

“I can focus on some parts, while blurring other parts using a Linhof large format camera with a dark cloth,” the artist explained. “I took the photos so that the white porcelain is somewhat blurry, not shiny, and should show the vestiges of time. The viewers’ eyes should not stay on their surfaces but look deep into their beauty and spiritual presence below the surface.”

“I was happy to hear contemporary potters say ‘your photos reveal the feeling we want to reach with our works,” he added. “But I would decline their requests to take pictures of their works because I only capture objects that have survived many years.” 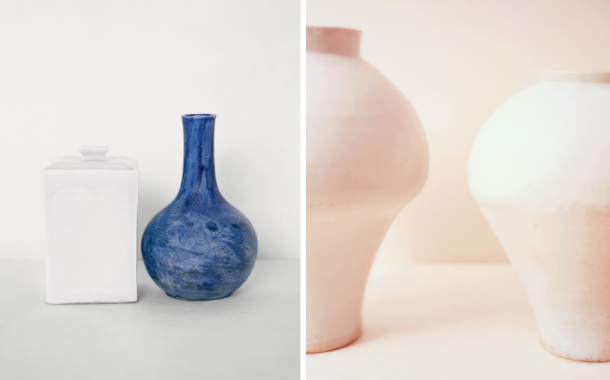 “The sparse blue decorations on the Joseon porcelains are like individual paintings of free-spirited brush strokes, while the decorations on Chinese and Japanese ones are like elaborate patterns,” he continued. “The color of the blue on the paintings is so light that they look like out-of-focus photos. And the paintings look permeated into the surface of the porcelain, instead of staying on the surface as patterns.”

Koo’s photos provide a whole new sensuous and aesthetic way of experiencing Joseon-era blue-and-white porcelain, even to those who have seen them many times. This is why Koo is called a master of presenting new images of things that we are already familiar with.

This applies not only to white porcelains now in museums, but also to everyday objects of our time or the near past. Koo is known for collecting all kinds of old things not commonly regarded as antiques but are considered by the artist to have a strange beauty and an intriguing story in them. To learn about his collection, the Korea JoongAng Daily visited the artist’s studio in the Bundang district of Seongnam, Gyeonggi. The studio is a ‘little museum’ of the miscellaneous items he has collected over time.

A new, second building of the studio is filled with all kinds of objects, including a cracked key-hanging board that once belonged to an old lock and key shop in Seoul; a rusty cash register from Japan; small mirrors from Spain and other countries; used lamps, birdcages, picture frames and boxes of all shapes and colors from all parts of the world; and a roof decoration in the shape of a phoenix head found at a destroyed house in Korea. Some of them appeared in the photo works of the artist.

The following are excerpts from a conversation with Koo at his sanctuary of odds and ends. 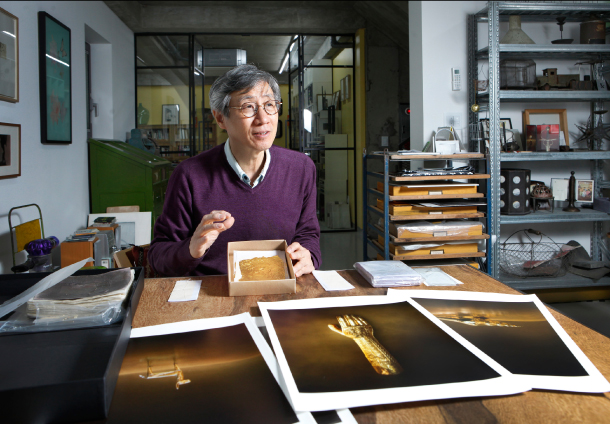 Koo explains the gold leaf he obtained during a recent trip to India. The gold leaf sheets were made in the traditional way of hammering a gold ribbon hundreds of thousands of times. The artist said he was fascinated by the traces of labor and time remaining on the paper sheets inserted between gold-leaf sheets during the process. [PARK SANG-MOON]

Q. Many things in your collection are supposed to hold something inside of them but are now empty, like the boxes. Why?

A. I like spaces where something was, but is gone now. [His “Objects” series captures boxes’ interiors with empty concave holes that once contained something else.] I have always been interested in fullness/emptiness, existence/absence, the related flow of time and nostalgia about disappearing things. The “Vessel” and “Blue-and-White Porcelain Jar” series are also related to my interests because my photos prove not only the existence of the porcelains, but also the absence [of the people who made and used them and of the things they contained.]

In that context, isn’t your new subject - gold - different from your former subjects?

It is related with time, one of my long-time interests. Seeing people eager for not only Joseon white porcelains, but also photos of them, I became curious about what people consider to be precious. After coming across a gold mine in Australia in 2015, [I thought a lot about] gold, which has been prized across the ages and cultures of the world.

Then, I went to Lima, Peru, for a lecture. Coincidentally, the country [is home to] the ancient Inca Civilization, which is famous for gold relics. Musing over the invasions and wars the civilization went through due to gold, I became more curious about why people are so fascinated by it. So, I contacted the Gold Museum of Peru and was allowed to take pictures of the gold relics inside of it, such as the hand of a mummy and a simple goblet, which surprisingly resembles those of ancient Korea. You know, the prehistoric cultures have similar archetypes, and I guess prizing gold also originates from sun worship and preference for a mineral that shines like sunlight and doesn’t change over time.

Now, I’m studying, observing and taking pictures of gold relics from various cultures. I enjoy the process itself and don’t yet know how this new project will evolve.

You recently traveled to India. Was it also for the gold project?

Artist Koo’s studio is full of various objects he has been collecting for a long time. He says he thinks about their histories and their anonymous craftsmen.[MOON SO-YOUNG]

Yes. I visited craftsmen who make gold leaf sheets in the traditional way of hammering a gold ribbon hundreds of thousands of times. The sheets are so thin! The desire for decorating things with gold has led the craftsmen to make a tiny gold ribbon into a sheet so wide and so thin. And I became fascinated by the traces of labor and time remaining on the paper sheets that are inserted between gold leaf sheets during the hammering. I’d like to take pictures of them so they could look like a painting by Mark Rothko. The vestige of time never leaves my works.

Because I feel that the years I have lived make me who I am today. If I had lived smoothly without twists and turns, I wouldn’t feel this. When I was young, I was an introverted, lonely child. As the second son of a large family, I was always overshadowed by my older brother who had and met all the expectations of the family. Because my younger brother was the darling baby, I felt isolated and thought that life was hard even before I entered elementary school. I found comfort in collecting various small objects, having affection for them, imagining their stories and talking with them.

I managed to grow as a good student, enter a good university and get a good job at a large company, but I was never praised for that. I was never happy, not only because of that, but also because I didn’t know what I really wanted. I reached my limits when I was working at the company and left to study in Germany. There, the streets were filled with the objects and prints I liked. And when I presented my first projects at the graduate school there, I got much praise for the first time in my life. My life changed at that time. But the suffering I underwent before then is also important to who I am now: my personal history, everyone’s personal history and the histories of all things have great meaning to me.