The logo and uniform for the newly minted Kiwoom Heroes were unveiled Tuesday. 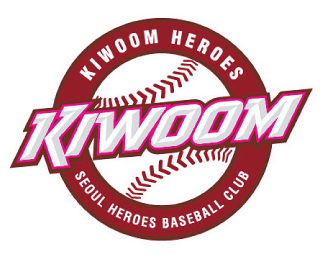 Beginning Tuesday, the western Seoul baseball club that competed last season as the Nexen Heroes officially became the Kiwoom Heroes. The club appeared to keep its logo design pretty much the same, as well as keeping its signature burgundy and white color scheme.

Although the deal was made in November last year, until Tuesday it was not confirmed whether the club would continue playing as the Heroes.

The Heroes were established in 2008 under the name Woori Heroes, after the Hyundai Unicorns were disbanded. The club was founded in western Seoul by Centennial Investments.

Unlike every other club in the league, Centennial did not name its new team after the company. Instead, in a bid to raise funds, Centennial sold the naming rights of the club to Woori Tobacco in 2008.

From the summer of 2008, the Heroes competed with no sponsor as Woori Tobacco broke off its sponsorship deal in with the Heroes in August 2008.

Due to this, the club was listed only as the Heroes until Nexen came on board in 2010.

After nine seasons playing as the Nexen Heroes, the naming rights were once again sold, this time to Kiwoom Securities. The club’s logo, uniform and cheer songs have also updated.

“Hopefully, Kiwoom and the Heroes will form a great keystone combination and help with the development of Korean baseball,” Kiwoom Securities CEO Lee Hyun was quoted as saying on Yonhap.

The Kiwoom Heroes’ logo appears similar to that used by the Nexen Heroes. The background baseball image remains the same, although obviously it now has Kiwoom emblazoned across it, rather than Nexen.

The “K” in Kiwoom is stylized with the arrow motif from the company’s logo.

As for the team color, Kiwoom decided to retain the club’s traditional colors of burgundy and white. Although Kiwoom Securities’ colors are navy and magenta, they decided not to force a change of identity on the club.

“Since we have a new name, we have to brace ourselves for new challenges ahead,” Heroes’ star-hitter Park Byung-ho was quoted as saying. “This is a new beginning for us and we’ll try to reach new heights this year and win the championship.”