The challenges facing the young

The challenges facing the young

SON HAE-YONG
The author is an economic policy team head of the JoongAng Ilbo. 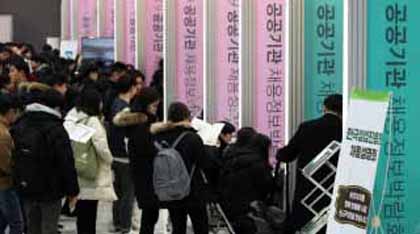 Young people attend a job fair on employment at public institutions held at the aT Center in Yangjae District, southern Seoul, on Jan. 9. [NEWS1]

There are gateways job-seekers must pass through in preparing for employment. They need language test scores and must win awards and have overseas volunteer experience. Young people say they need to prepare for TOEIC and build résumés before they start the search.

But it is not easy. If you want to join a club or study group for certain activities or topics, you have to go through another set of tests and interviews. Some require certain certificates or grades. English tests used to be multiple-choice, but these days, students have to prepare for oral tests. Those who get hired need ever-higher TOEIC scores.

Young people joke that they need a perfect TOEIC score and a perfect résumé for a job. Parents spend a great deal of money preparing them for college, and in college, more time and money are invested in raising English-language scores and in gaining experience. College graduates reportedly spend 40 million won ($35,522) to build their resumes.

Young people are some of the most-highly educated in history, but youth unemployment is high: 23.4 percent of the people in late 20s are unemployed, far higher than the 14.4-percent OECD average. Korea is the only country with more than a 20-percent unemployment rate for this age group.

I am worried youth unemployment will become more serious. The number of students entering college peaked between 2010 and 2014, and they are now graduating. Vice Prime Minister for economic affairs Hong Nam-ki said in a meeting with young people that it will be tough to find jobs over the next three years.

After failing in their job searches, some may give up and become pessimistic about life. If they are disheartened, society will lose vitality. The increase of young people without income lowers the growth potential. But there are policies that negatively affect the employment of young people. Companies decrease hiring as they are burdened by payroll as a result of minimum wage hikes. Regular employment of irregular employees benefits those who are already in the workplace. The 52-hour workweek may lead to expansion of automation and the relocation of factories.

The future of the nation is gloomy without resolving the job issues for young people.