Crowdfunding booms as limits are liberalized

Crowdfunding booms as limits are liberalized 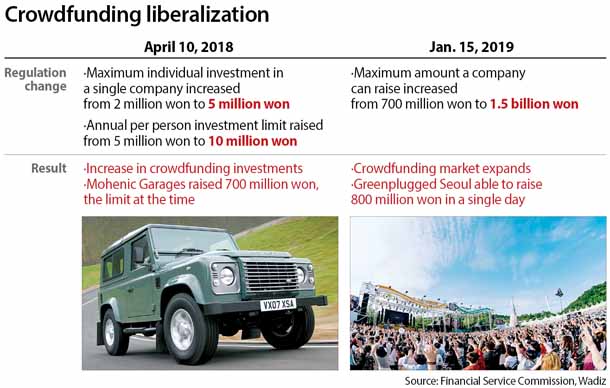 Wadiz facilitated over 100 billion won ($88.6 million) of investment in 2018, making it the first crowdfunding platform in Korea to cross that threshold.

Crowdfunding allows individuals to easily invest in start-ups and start-ups to raise capital without going through a full initial public offering (IPO), though the totals are limited.

Although crowdfunding is growing in Korea, it is still small compared to the global crowdfunding market, which is worth an estimated $11.5 billion, according to Statista.

The size of Korea’s crowdfunding market is estimated to be around 120 billion won.

Market experts say Wadiz’s success in raising over 100 billion won is a huge achievement. They add that recent improvements in the market are largely the result of loosening regulations.

“At the early stage, the government tightly regulated the business to protect consumers,” said Koo Ja-hyun, a researcher at Korea Development Institute (KDI). “But as the government gradually eased regulations to promote the growth of start-ups and the development of fintech, there have been several positive cases.”

In April last year, the government raised the limits on how much individual investors can commit to crowdfunding opportunities.

Previously, each person was limited to investing a maximum of 2 million won in a single start-up through crowdfunding. Each investor was capped at a total of 5 million won of crowdfunding investment a year.

Since April last year, investors have been able to invest 5 million won in a single company via crowdfunding and 10 million won total per year.

Once the regulations were changed, investment flooded in.

According to the Korea Securities Depository, handmade carmaker Mohenic Garages raised the most money via crowdfunding, hitting 700 million won, the maximum allowed at the time.

Various companies in different fields are trying to raise investment through crowdfunding.

“As the number of successful crowdfunding [cases] increase, start-ups that previously had to rely on the investment from government-owned financial institutions are now going directly to investors,” said Chun Chang-min, researcher at the Korea Capital Market Institute. “This type of investment is encouraging innovation at these companies.”

Regulations were further eased on Jan. 15. The maximum limit that a company can raise from crowdfunding has been increased from 700 million won to 1.5 billion won.

“Companies that succeeded in realizing their ideas through crowdfunding on average need 1.5 billion won,” said Kang Young-soo, a director general of the asset management division at the Financial Service Commission. “And for that reason, we have decided to raise the limit.”

Greenplugged Seoul, an environmental campaign music festival, opened a crowdfunding account on Jan. 16, the day after the maximum limit was raised. In just a single day, it was able to take in 800 million won.

Boolio, a company that specializes in digital asset management, opened a crowdfunding account on Jan. 17, and in just three days, the company raised over 1 billion won.

It is the single largest amount of money raised through crowdfunding in Korea.

“The government is currently working on reforming the law so that even SMEs can start securing investments through crowdfunding,” said the FSC director general Kang. Once SMEs regulations are reformed, “the crowdfunding market is expected to expand significantly.”