Military lays into Japan for buzzing ship with plane

Military lays into Japan for buzzing ship with plane 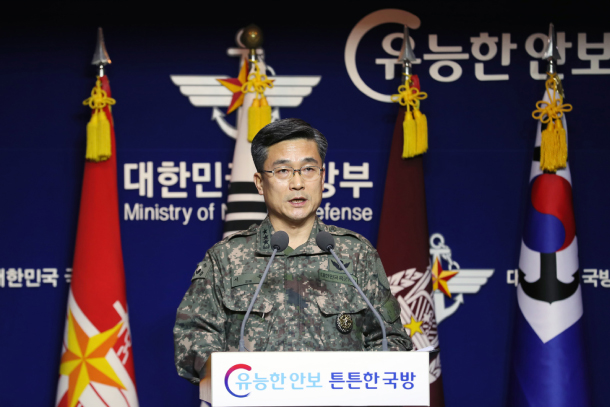 Suh Wook, chief director of operations at the South Korean Joint Chiefs of Staff, speaks at a press conference at the Defense Ministry in Seoul Wednesday. [YONHAP]

At 2:03 p.m., a Japanese Maritime Self-Defense Force patrol plane flew close to the Korean Navy ship at an altitude of 60 to 70 meters (197 to 230 feet), just 540 meters away from Ieodo, a submerged rock south of Korea’s southern island of Jeju, it said.

“This low-altitude, close-range flight toward the ship of a partner country again today is a clearly provocative act, and we cannot help but doubt Japan’s intent, and [we] strongly condemn this,” Suh Wook, chief director of operations at the Joint Chiefs of Staff, said in a press conference.

“Should this be repeated again, we will strongly respond in line with our military’s code of conduct,” he added.

The incident further escalated tensions between Seoul and Tokyo, which have been in a month-long spat over a South Korean warship’s radar operation for a humanitarian mission to rescue a North Korean warship in distress on Dec. 20.

Earlier in the day, Seoul’s Defense Minister Jeong Kyeong-doo openly raised allegations of Tokyo’s “political intent” in the row that appeared to be winding down following Tokyo’s abrupt exit from bilateral consultations Monday.

The minister cast Tokyo’s departure from working-level dialogue with Seoul as an “exit strategy” based on its realization that it cannot overturn Seoul’s argument “logically and by international law.”

The tussle erupted last month when Tokyo claimed that a South Korean destroyer locked fire-control radar on its maritime patrol aircraft in the two countries’ overlapping exclusive economic zones. Seoul rejected the charge, saying the warship was on a humanitarian mission. It later accused the Japanese plane of conducting a threatening low-altitude flight toward its destroyer.