CHOI JI-YOUNG
The author is head of the industry news team 2 of the JoongAng Ilbo. 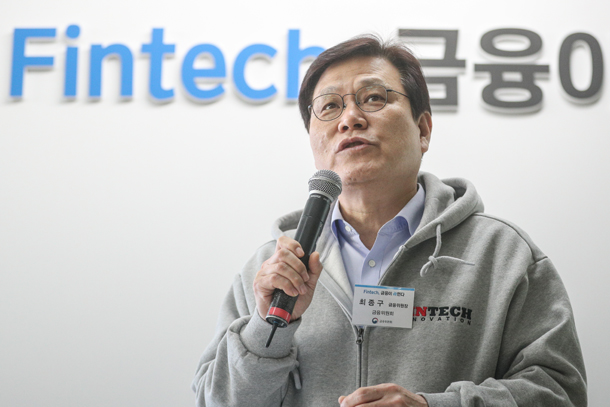 Choi Jong-ku, chairman of the Financial Services Commission, explains the government’s deregulation of fintech start-ups in Seoul on Jan. 16. [NEWS1]

The Korean government is inspired by positive results. Before the report was announced, the Ministry of SMEs and Startups distributed a press release in the afternoon. The quality of start-ups in Korea improved as the country was ranked fourth in terms of opportunity-driven entrepreneurship — four ranks higher than the previous year — and 27th in terms of necessity-driven entrepreneurship — four ranks lower. The ministry also stressed Korea was ranked fifth for appropriateness of entrepreneurship-related government policies. It said various government support measures and a start-up boom in the civilian sector had gradually improved the entrepreneurial ecosystem in Korea.

According to a survey of the adult population, Korea showed improvement in 16 of 17 indicators compared to the previous year. A survey on experts showed improvements in 6 of 12 indicators, while the other six remained the same. The government found it regrettable that the fear of failure was 32.9 percent, 0.6-percent higher than the previous year and down seven places.

I checked the report on the GEM website the next day and only saw a very small improvement. While the index for government policy went up from 5.76 to 6.14, the ranking actually went down from fourth to fifth. The indicator for regulations improved from 4.48 to 4.45, one rank higher than a year earlier.

Should we be satisfied with this small accomplishment? The JoongAng Ilbo’s “Regulation Out” investigative team met various innovative companies in China and Southeast Asia last year. Vietnam has no government regulations, while in Singapore companies that have been chosen for assistance are supported. In Malaysia, the government resolves the software workforce’s shortage with working visas and in China, where there are no regulations preventing 24-hour telemedicine services from being created, 2.1 million out of 2.3 million Chinese doctors participate. It is defeatist to say whatever foreign governments are doing is great and what the Korean government is doing is not as great. Yet the Korean economic environment is too bleak to praise.

There is an indicator in which Korea topped the ranking that was not in the press release. Korea has the highest rate of adults involved in gig economy activities and the sharing economy, at 21. 5 percent, far higher than 10.8 percent in the United States and 12.3 percent in Israel. However, regulations for lodging- and car-sharing are to be partially removed this year, and there is no sign of allowing carpooling. Should we still boast of an improving environment for start-ups?