Sentiment of consumers inched up in December

Sentiment of consumers inched up in December 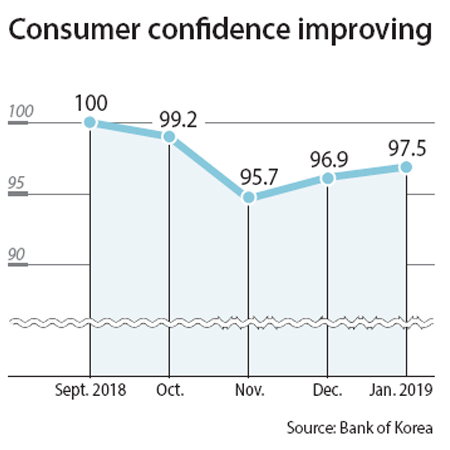 But confidence in the real estate market hit its lowest level since 2013 as a result of tougher government regulations on speculation and higher real estate taxes.

According to the Bank of Korea (BOK) on Friday, the composite consumer sentiment index (CCSI) in January was 97.5, which was up 0.6 points from December.

The improvement in confidence reflects growing expectations for the government to help boost the economy. Additionally, resuming trade negotiations between the United States and China and the slowing growth of prices of consumer necessities had a positive effect on this month’s confidence level, according to the central bank. However, as the index showed, most respondents were negative about economic prospects.

The confidence index has remained below 100 since hitting 99.2 in October.

The confidence report came a day after the central bank lowered its outlook for this year’s economic growth from 2.7 percent to 2.6 percent citing slowing growth in the world’s economy and weaker-than-expected exports.

Confidence in wages and jobs went up. Expectation for wage increases reached 122, up three points from December, while expectations regarding jobs hit 78, up four points and the first increase in three months.

The spending outlook remained the same as in December at 109.

Confidence in housing prices hit 91, the lowest level since data started being compiled in its current form in 2013. Additionally, real estate market confidence has been falling for five consecutive months since the government introduced regulations and higher assessed values on standalone houses, which on national average rose 9 percent and in Seoul 17 percent compared to last year.