A panel discussion on corporate social responsibility was held Thursday during a private session titled “Shedding light on the hidden value of business.” It was hosted by the Korean conglomerate in partnership with the Boston Consulting Group. It is the first time the SK Group hosted a separate session at the Davos forum.

“SK Group has been running an experimental program that measures the social value a firm generates and offers incentives in proportion to the generated value,” he said. “We supported roughly 190 social enterprises with this pilot program during the last four years, and they were able to generate more social and economic value than the 15 billion won [$13.3 million] in incentives.” 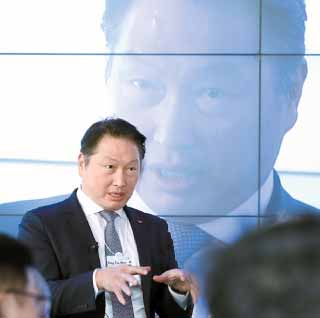 SK Group has its own tool to measure social value used internally and is still updating it to expand the uses, a group spokesperson said.

SK affiliates use an accounting methodology dubbed the “double bottom line.” Apart from the economic bottom line, affiliates measure their social bottom lines based on multiple indicators, like their contributions to environment and social well-being.

“It is critical to accelerate the practice of considering social and environmental factors alongside financial performance,” said George Serafeim, a professor at Harvard Business School.