Prices get slashed in Samcheong

Prices get slashed in Samcheong 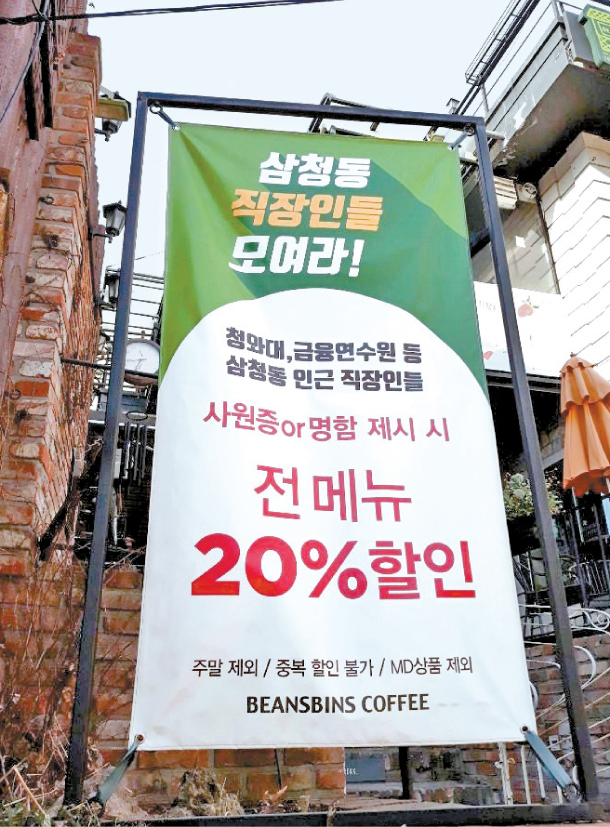 A placard in front of a Beansbins cafe reads “20 percent discount on all items” for office workers near Samcheong-dong, central Seoul. [KIM YOUNG-JU]

Property in Samcheong-dong in central Seoul is now on the market at hugely discounted rates.

Located near Gyeongbokgung Palace and the Blue House, the neighborhood was one of the most visited tourist sites in the city, along with nearby Bukchon and Insa-dong.

Just a few years ago, Samcheong-dong’s popularity sent commercial rent through the roof. When the government opened the road in front of the Blue House to the public since 2000, tourism to Samcheong-dong sharply grew. Small handicraft workshops and independent restaurants also contributed to the area’s popularity. But with the popularity came a hike in rent prices.

Unable to pay the high prices, merchants gradually moved out until, in 2016, demand dried up. By that point, the original residents of the neighborhood were long gone. With all the merchants also gone, a great number of buildings stood empty. 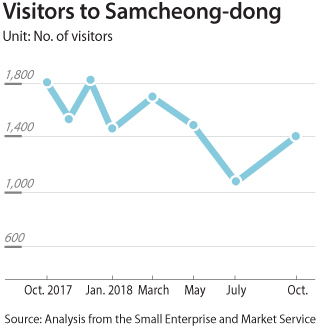 The building owners eventually had no choice but to give up. They started to cut rent prices by up to 50 percent to attract new tenants.

“That contract was recent, so it shows that the rent in Samcheong-dong is actually declining,” said the head of a real estate agency that requested anonymity.

Slow Park, a 300-square-meter (3,230-square-feet) cafe, is a popular spot in the neighborhood. Its monthly rent is around 10 million won, half of what it was four to five years ago.

“The building is owned by my father and the monthly rent is four to five million won less than two years ago,” said Choe Taek-kyun, the head of Slow Park.

“The rent in another building owned by my father in Samcheong-dong also fell 40 percent.”

The decision by landlords to lower rent is unusual in Korea, according to experts.

“Samcheong-dong’s case is unique because in most places like Garosu-gil [in southern Seoul], landlords do not lower the rent even if a space is empty,” said Cho Joo-hyun, a professor of real estate studies at Konkuk University.

Consumer prices in the area also fell as merchants offered discounts on food and drinks in a bid to attract customers back to the neighborhood.

“The number of visitors has reduced remarkably, so the average sales last month were half of what they used to be” said Choi.

According to the analysis from the Small Enterprise and Market Service, the number of people visiting the area within a 100-meter (328-foot) radius of the Samcheong-dong Community Service Center in October 2018 was 1,400, down by 22 percent in a year.

“We enhanced the quality of our service by lowering prices and expanding the number of employees to as many as eight to nine people.”

Since last November, Japanese restaurant Sushigo in Samcheong-dong has been reducing its prices.

“We put our utmost effort into grabbing customers by reducing prices, but it is still difficult,” said owner Ha Ji-won. “We are planning to change the menu entirely next month.”

The Samcheong branch of coffee franchise BeansBins has a placard out front that reads “20 percent discount on all items.”

Cafe Jinsun, a famous book cafe in Samcheong-dong, recently lowered its prices and introduced a buy one, get one free policy.

“The number of visitors increases when famous restaurants open,” said the CEO of a real estate agency in Samcheong-dong. “As the reputation of local business has fallen since the area’s heyday, lowering the cost of rent is urgent.”

Despite the massive price cuts, the revival of Samcheong-dong still has a long way to go. Not only does it have to fight with a difficult economic climate, but also a powerful rival nearby - Ikseon-dong, which is rapidly growing in popularity as the next trendy neighborhood in central Seoul.

Among the 150 stores in Samcheong-dong, around 20 are empty.

“Associations or unions of merchants must exert themselves to revive the area,” said Cho. “If Samcheong-dong is brought back, it will set an example of how to overcome gentrification and trigger the same strategy of reducing rent in other places [going through a similar scenario].”