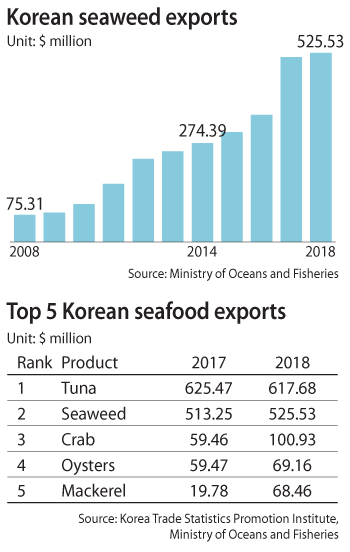 Global seaweed powerhouse Korea is facing unlikely competition from Thailand, which doesn’t even harvest the product.

According to the Ministry of Oceans and Fisheries, Korea’s exports of seaweed products, better known as gim, grew from $300 million in 2015 to $526 million in 2018.

It is the country’s second-largest seafood export after tuna.

Korea’s main competition in the market is China, which recorded exports of $170 million in 2017, just a third of Korea’s total. With exports growing steadily, the Fisheries Ministry plans to boost sales for the product to $1 billion by 2024.

Despite the country’s importance in the market, Thailand has gradually become a contender.

The Southeast Asian country, which does not harvest its own seaweed, has adopted a simple strategy: Import dried raw materials, turn them into flavored snacks and export the resulting product globally.

The country offers a variety of seaweed-based snacks, with flavors ranging from wasabi to coconut.

In terms of China’s seasoned seaweed imports, Korea held the largest market share until 2016. Its market share fell from 65 percent in 2015 to 39 percent in 2017, while Thailand’s share rose from 34 percent to 60 percent over the same period.

Thailand has developed a strong seaweed industry after decades of importing the product processed in Japan. The country even has young business tycoons who have achieved success from seaweed products.

Itthipat Peeradechapan, founder of processed seaweed company Tao Kae Noi, built a fortune selling the product in specialized stores in the country’s capital. The stores target mainly tourists. In a recent interview, the CEO expressed confidence in his product, saying 20 percent of the world’s population has tried seaweed products.

One of the reasons for Thailand’s success in the seaweed market is that the country adds significant value to the product. The country also takes advantage of K-pop by involving Korean celebrities in promotional campaigns.

Korean companies are taking note of the Thai competition.

Instead of selling the product as seaweed, one company has opted to call it “sea veggies” to attract more consumers.

Unlike in Korea and Japan, most countries consume seaweed products as snacks. The common seaweed in Korea, which is eaten with rice, can be too greasy and salty for foreign consumers.

Companies have diversified their products to fit the tastes of consumers abroad, and there are seaweed products available with a variety of flavors, such as soy sauce, cheese, habanero peppers and others, marketed as snacks for drinks.

According to Glovery US CEO Park Ji-hoon, who introduced seaweed brand The Basak, “positioning [seaweed] in western markets as a ‘super food’ without additives is effective.”

CEO of trade start-up Addi Global, Shim Youn-bo, said, “if there is support, such as discounts in materials purchased for export products, seaweed snack exports will become more active.”