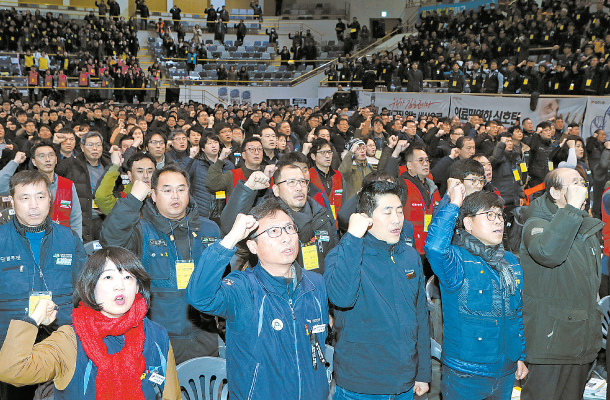 Members of the Korean Confederation of Trade Unions (KCTU) gathered at KBS Arena, western Seoul, Monday to decide whether they will join the meeting of the Presidential Economic Social and Labor Committee. [CHOI JEONG-DONG]

The Presidential Economic Social and Labor Committee, which was formed just last year, is missing something important: labor.

“The economic, social and labor committee has already been launched,” said the Blue House spokesman Kim Eui-kyeom Tuesday. “The social conversation and compromise is not a choice that can be done or not.”

Kim said the committee will meet as scheduled even without the participation of the labor community.

The decision by labor was made despite President Moon Jae-in’s personal efforts. He invited representatives from the groups to the Blue House to convince them of the importance of taking part in the discussion.

On Jan. 25, President Moon met with the heads of both umbrella labor unions at the Blue House for 80 minutes. It was the first meeting the president had with them in six months, with the last meeting having been held on July 3 last year.

“It is the social consensus that there’s a need to address labor issues, such as the minimum wage, labor hours and labor safety,” Moon said. “These are issues that the government can’t [address] on its own.”

He told the representatives that the people want to achieve improvements in these areas through dialogue between labor and business, and asked union representatives to actively participate in the committee, which was created for such purposes.

Thursday’s meeting was organized after the KCTU refused to attend the first meeting of the committee, which was held in November.

The committee is based on the tripartite commission which brought together the government, labor unions - with members of both umbrella labor unions - and the business representatives, namely the Korea Employers’ Federation and the Korea Chamber of Commerce and Industry.

The KCTU has opposed participation in the committee meeting as it objects to the reforms of wage calculations, specifically the decision to include bonuses and other extra pay in regular income.

With the inclusion of income, the effective average hourly wage could increase.

This time, it was the FKTU that was the first to announce it would not participate in the committee. In a statement, the FKTU argues the presidential committee’s aim is to discuss the ratification of the International Labor Organization’s (ILO) conventions and realize a society that respects labor.

“The proposals made by business representatives and the government members of the committee not only seriously violate basic labor rights, but retreat from current labor-management custom and systems,” the union said in the statement.

The union argues business has been pushing to allow for the hiring of outside laborers during a strike, to abolish criminal penalties when labor rights are violated by management and for the banning strikes held on company grounds.

“Korea has been a member of the OECD since 1996 and has made repeated promises to ratify the ILO convention,” the union stated. “But over the past 20 years, it has repeatedly broken those promises.”

“We’re trying to participate in the social discussion, not because we accept the current administration’s fantasy or expectations, or that we are planning to compromise or to give in,” said Kim Myung-hwan, head of the KCTU when the meeting of 1,000 union members started. “We’re trying to carry through with the reform issues.”

Kim tried to convince union members that active participation in the committee is necessary to bring about major social reform, and discussed strike plans for the second half of this year if union demands are not met.

Hard-line unions were not impressed by the arguments, especially the union that represents metal workers from Hyundai Motor and its affiliate Kia Motors.

“The existing powers of metal unions blocked participation,” said a business representative after hearing the news that the KCTU decided to not participate in the committee meeting.

“It is not appropriate to participate in the presidential committee at a time when tensions between the government and the labor union are rising,” Kim Ho-gyu, head of the Korean Metal Workers’ Union.

Presidential committee chairman Moon Sung-hyun, who was a labor union representative before becoming a politician and the former head of the Democratic Labor Party, said he was disappointed by the labor unions’ decision.

“While it is regretful, we will have to do what we need to do one step at a time,” Moon said. However, he harshly criticized the labor unions for not even taking part in the larger social conversation.

“If they come without preparation, negotiations will not be properly concluded, and if anything but a proper agreement passes to the National Assembly, it will only increase conflict,” Moon said.

“The economic participants have to take responsibility for not playing the right role.”

Cho Joon-mo, economics professor at Sungkyunkwan University, said the problem lies in that labor unions don’t see the need to participate in a social discussion since society and the government accept their demands when they take to the streets.

“There’s a need to take action against those refusing to participate in the social discussion and impose accountability,” Cho said.