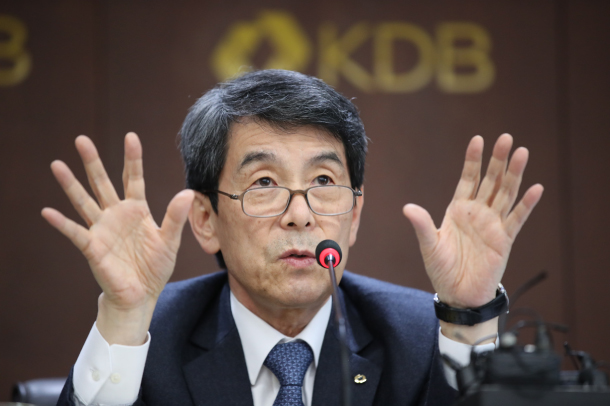 The main creditor of Daewoo Shipbuilding & Marine Engineering (DSME) tentatively agreed to sell a controlling stake in the troubled shipyard to Hyundai Heavy Industries (HHI) on Thursday in a deal that could be worth around 2 trillion won ($1.7 billion).

But the Korea Development Bank (KDB), which holds a majority share of DSME, stressed that the deal is not complete and that Samsung Heavy Industries, the country’s third-largest shipbuilder, will be asked if it is interested in taking over DSME.

“We didn’t adopt a conventional, open-competition bidding process this time, because the sale comes with a complex transaction structure,” said Lee Dong-gull, chairman of the KDB.

“If Samsung comes with better conditions, the result could change,” he said.

Under a conditional deal, Hyundai Heavy Industries Group will build a new holding company to control HHI, DSME and affiliates of DSME, which means that the deal would not translate into a full merger of the two companies. In this deal, the KDB is offering 1.5 trillion won in support and possibly another 1 trillion won if needed.

Since DSME will be run under the holding company, there will be no layoffs, according to the KDB’s Lee.

“The deal is not about merging the two companies,” Lee said, “Rather, DSME will be holistically managed by the holdings unit along with HHI and other affiliates.”

Lee said the KDB will talk to Samsung Heavy Industries this week to find out if it’s interested. If Samsung isn’t, the KDB and HHI could sign an agreement on March 8.

Industry analysts said the chances are slim that Samsung would be interested.

HHI also said on Thursday that it is determined to take over the cash-strapped DSME, which has gone through a wrenching restructuring over the past few years.

“HHI will try its best to be selected as the final buyer,” the company said in a statement.

“It will provide a new opportunity for Korea to have firm ground in the global shipbuilding industry.”

But even if Hyundai and the KDB come to a final agreement, potential risks exist going forward.

The combined unit could face an anti-trust regulatory hurdle in overseas markets since the deal would combine such big shipbuilders.

The KDB said it has prepared for that potential problem.