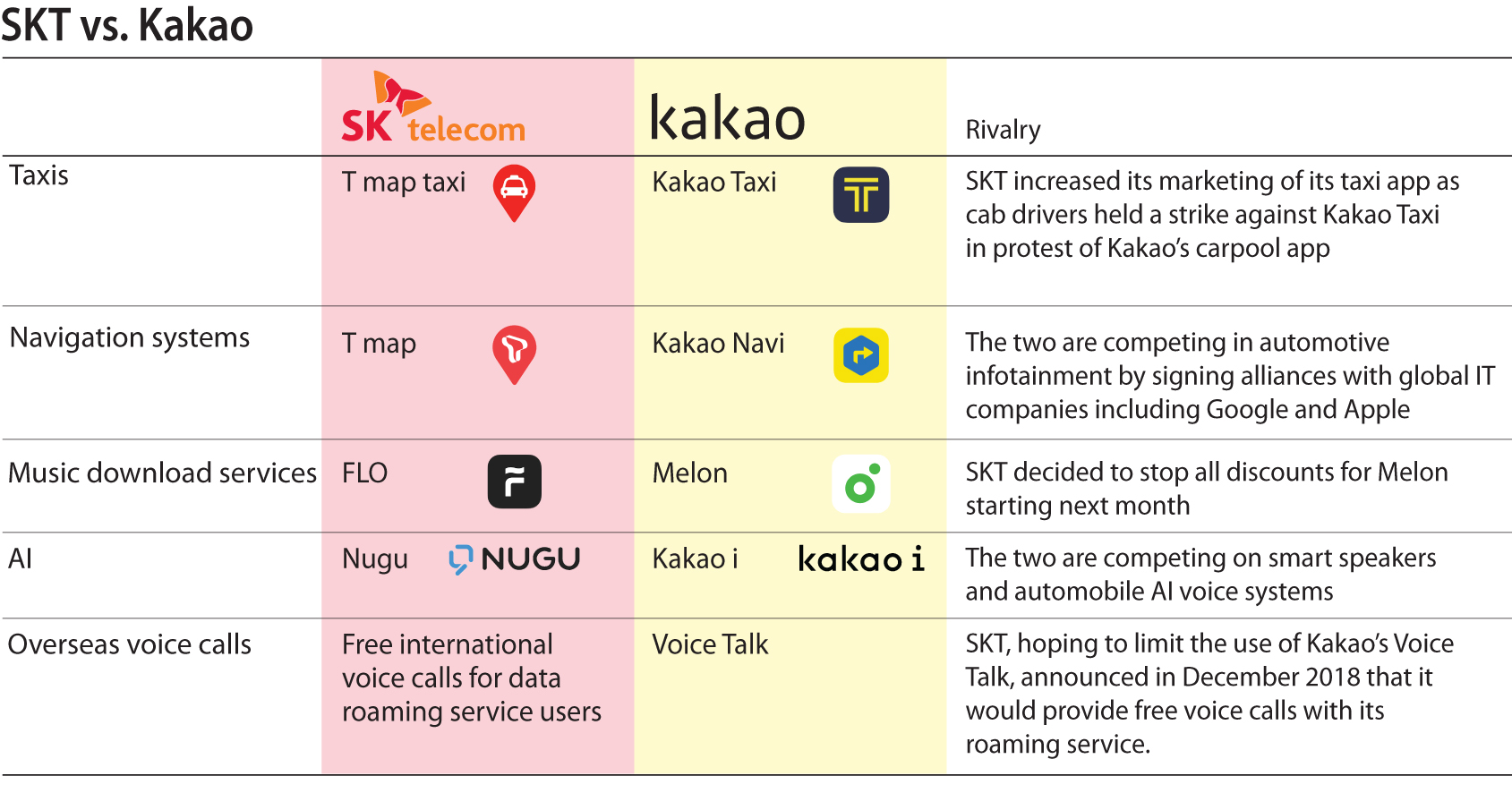 SK Telecom and Kakao, two companies that until recently operated in completely different industries, are increasingly emerging as rivals in a range of businesses from mobile taxi apps to AI systems.

The SK Telecom-Kakao rivalry has been steadily growing as the emergence of new technologies has broken down the barriers between different industries and businesses.

SK Telecom, Korea’s No. 1 mobile carrier, in recent years has been busy catching up with Kakao, which started off as a mobile messaging app but has expanded to cover a large number of mobile services.

The mobile carrier upped the ante on Thursday, announcing that starting next month it will no longer provide discounts on Kakao’s music download service Melon.

“The company saw that it has secured substantial competitiveness of its own music download service FLO and has taken the route of separating from Melon,” said an industry insider, who requested anonymity.

SK Telecom used to have a strategic alliance with Kakao despite having its own streaming service Music Mate as Melon was unrivaled as the top music service.

SK Telecom gave a discount as high as 50 percent for its users to subscribe to the streaming service.

However, in December last year, Music Mate was overhauled and rebranded as FLO and SK Telecom started offering a 50 percent discount on that instead.

The decision is risky, as devoted Melon users could discontinue their subscription to SK Telecom.

Behind SK Telecom’s gamble is the fierce competition between the two companies in a completely different area - artificial intelligence (AI).

The companies’ AI voice platforms are used not only in their respective smart speakers but also in infotainment systems installed in cars.

And the biggest use of AI voice platforms is music streaming.

Locking down the mobility market is expected to play a significant role in securing a competitive lead in the AI industry, and the two companies are locked in fierce competition to take the edge in that area.

The data collected from vehicles moving from one destination to another is larger and more value than data collected through AI speaker sitting in a house.

As such, the two companies are also clashing on navigation services.

SK Telecom is ramping up its attacks on Kakao with its T Map taxi, T Map navigation and T Map X Nugu, a navigation system that is controlled by voice command via an AI assistant. T Map X Nugu allows a driver to not only verbally command the system to plot a route to a destination but also turn on music and ask basic information such as the weather.

SK Telecom isn’t the only company branching out. Kakao hasn’t been idle, taking the fight to SK when it comes to the mobile navigation system.

While SK Telecom introduced the T Map X Nugu, Kakao has introduced its own AI navigation system, Kakao i.

SK Telecom’s attempt to grow its T Map taxi while Kakao was busy fielding off attacks from the taxi lobby was largely because the company is trying to increase its supply of big data information as Kakao currently has more subscribers to its taxi hailing app.

“Taxis are almost the only vehicle that has the ability to collect huge amount of information [in Korea],” said an industry insider.

The two companies have also been competing in the infotainment business by signing alliances with major global IT companies.

Kakao in July last year announced that Google’s Android-based automobile infotainment system Auto will run through its Kakao Navi. SK Telecom in September teamed up with Apple on the iOS12 CarPlay.

According to industry experts, the reason the two companies are competing so fiercely is because AI platforms will soon become a crucial part of their business in far more ways than the current focus on home and auto technology.

“AI platforms in the future will act as a bridge connecting companies to clients and even connecting different companies, which will be a main revenue source,” said Nam Seung-yong, head of the digital economics center at the Future Media Institute.

“The competition that will help secure the company’s lead in AI in all businesses from location information to payment will intensify.”