U.S., Korea sign defense deal for less than $1B

U.S., Korea sign defense deal for less than $1B 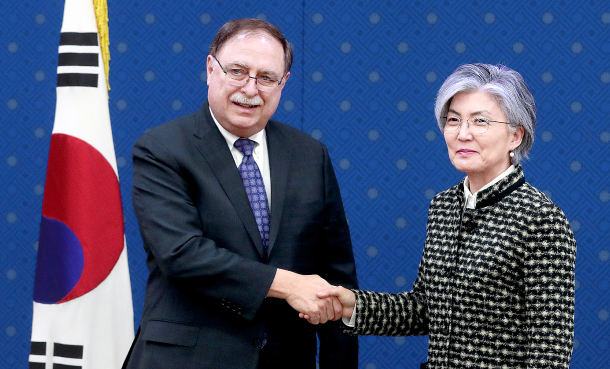 South Korean Foreign Minister Kang Kyung-wha, right, shakes hands with Timothy Betts, left, the top U.S. negotiator in defense cost-sharing talks between South Korea and the United States, at the Foreign Ministry office in central Seoul on Sunday, before the two allies sign a deal under which South Korea will pay 1.03 trillion won (＄916 million) for the operation of the 28,500-strong U.S. Forces Korea (USFK), up from 960 billion won in 2018. [NEWS1]

South Korea will pay 1.03 trillion won ($916 million) for the upkeep of the U.S. forces in South Korea (USFK), 8.2 percent more than what it spent last year, the two countries agreed Sunday. It’s the first time Seoul has ever agreed to pay above the 1 trillion won mark as U.S. President Donald Trump urges allies across the world to pay more for their own defense.

Seoul’s Foreign Affairs Ministry announced Sunday that it signed a “preliminary” deal with Washington that afternoon in central Seoul to decide how much South Korea will pay to host the 28,500 U.S. troops that make up the USFK. In a press release, the ministry explained that the 8.2-percent hike reflected South Korea’s own year-on-year defense budget increase.

The new deal, which is valid for one year, is expected to go into effect this April if the National Assembly gives the final green light. The agreement doesn’t require congressional approval from the United States.

Seoul paid around 960.2 billion won in 2018, which is known to be about half the total expense for stationing the USFK, though neither the South nor the United States has explicitly revealed how much Washington was paying for its troops - in other words, both countries roughly paid the same amount.

Sunday’s signing of a new Special Measures Agreement (SMA) was the result of months of wrangling between the two allies, as the United States pressed South Korea to pay more than $1 billion, which is about 1.13 trillion won, and asked for the deal to be renewed annually. Seoul refused both offers and asked for three-year deals, according to local diplomatic sources who briefed reporters on the condition of anonymity. The previous SMA expired at the end of last year with both countries failing to narrow their differences.

In the end, both Seoul and Washington made concessions, with South Korea agreeing to make the new deal valid for one year and the United States allowing Seoul to pay a little less than $1 billion. Seoul’s Foreign Ministry said in the press release that in case both countries fail to strike a new deal by “an appropriate time,” the current deal will be extended in order to prevent a void if both sides agree to the extension.

An official at the Foreign Ministry said Sunday that Washington made clear it was “not considering any changes” to the size of the USFK, a comment that came amid local fears that Trump may withdraw U.S. troops in exchange for Pyongyang’s disposal of intercontinental ballistic missiles (ICBMs), which can travel far enough to hit the U.S. mainland.

Other diplomatic sources said that over the course of discussions, Washington also dropped its earlier demand for Seoul to share the cost of rotationally deploying U.S. strategic assets around the Korean Peninsula as South Korea remained steadfast that the SMA was about maintaining the USFK. Seoul’s Foreign Ministry said the allies will form a working group to improve cost-sharing systems and reached various agreements to enhance transparency in spending.