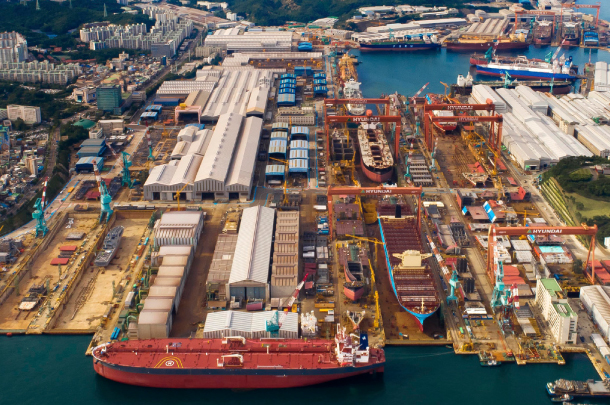 The final candidate to take over troubled Daewoo Shipbuilding and Marine Engineering (DSME) has been narrowed down to Hyundai Heavy Industries (HHI).

According to DSME’s largest-stakeholder, the Korea Development Bank (KDB), Samsung Heavy Industries officially pulled itself out of contention Monday.

According to a statement Tuesday, the KDB said it will convene a meeting of its board early next month to begin serious negotiations with HHI on the acquisition of DSME.

On Jan. 31, the KDB announced it had signed a memorandum of understanding (MOU) with HHI for the two to create a new holding company.

Under the agreement, KDB will be giving its 55.7-percent stake in DSME - estimated to be worth 2.2 trillion won ($1.95 billion) ­- to the new holding company, which will also own the assets of HHI. The new company will then issue its own shares, whose value will be same as the 55.7 percent stake in KDB.

HHI will be the largest stakeholder in the new holding company with a 26-percent stake while the KDB will be the second largest with 18 percent.

It has been reported HHI will be securing the necessary financing for the acquisition by selling its 19.9-percent stake in oil refiner Hyundai Oilbank.

A representative of the union held a press conference at the Ulsan City Hall Tuesday, demanding that HHI pull the plug on the acquisition.

The union said the workers of HHI feel betrayed since the possibility of the acquisition of DSME was announced last month.

The union representatives said in the last four years, 35,000 workers have lost their jobs through corporate restructuring and several hundreds have been forced to take leave with only partial pay.

“We are currently in a situation where job insecurity issues are piled up with the shipyard in Gunsan facing operating problems,” the union said in a statement.

“HHI and DSME overlaps in merchant vessels, offshore plants and special ships and under the guise of efficient management, we know that there will be a corporate restructuring,” it added.

The union said while KDB officials through the media have claimed there wouldn’t be any restructuring of its workforce, past corporate restructuring by HHI proves otherwise.

The union added that DSME has a high debt to equity ratio and a non-redeemable bond with no maturity date of 2.3 trillion won.

“Amid the instability of the shipbuilding industry, corporate restructuring will be sped up if both [HHI and DSME] become insolvent,” the union said.

The union said it will look into calling a strike if the acquisition proceeds.