LEE DONG-HYUN
The author is deputy industry news editor of the JoongAng Ilbo. 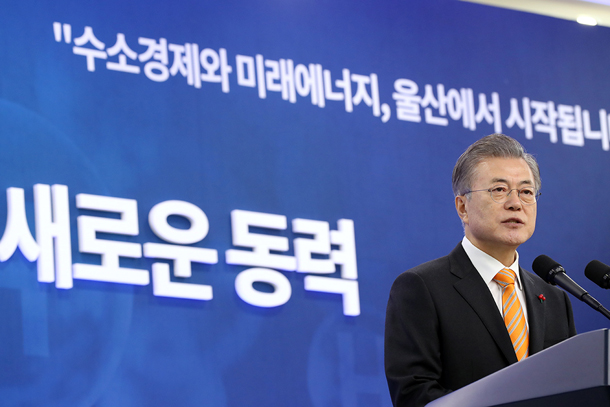 President Moon Jae-in stresses the importance of hydrogen cars as a major growth engine for the Korean economy in Ulsan on Jan. 17. [NEWS1]

Many people have doubts about whether the hydrogen economy promoted by the Moon Jae-in administration is feasible. Some assert it is better to invest in pure electric cars rather than hydrogen electric cars. A hydrogen fuel cell is a device that turns hydrogen into electricity. Hydrogen makes up to 92 percent of the universe in terms of the number of atoms, but it cannot exit on Earth by itself. Hydrogen fuel can be obtained through electrolysis of water or by “reforming” fossil fuel. You may ask: isn’t it better to charge a battery with electricity needed for electrolysis? Or, is it strange to produce hydrogen with fossil fuel when it’s supposed to be environmentally friendly? Both questions are valid.

Greenhouse gas emissions are controversial. A study by Metropolia University of Applied Science in Helsinki, Finland, on the entire process — from production of energy source to scrapping of a car — in 2016 showed that hydrogen electric cars emit 40 percent more carbon dioxide than their pure electric counterparts. No emissions are produced while operating the vehicles, but carbon dioxide is produced in the course of producing hydrogen as fuel. The counterargument is that using alternative energy to produce hydrogen will reduce carbon emissions. As a pure electric car requires a battery three times larger than one in a hydrogen electric car, the carbon emission from the production and scrapping of these batteries makes hydrogen electric cars more environmentally friendly.

An advantage of hydrogen fuel cell is energy storage. While generating electricity to produce hydrogen and converting it to electricity again is less efficient, electricity that needs to be used as soon as it is generated would be wasted without consumption. But storing electricity in the form of hydrogen allows long-term storage of energy in large amounts. In a hydrogen society, each fuel cell can serve as a “small power plant.”