‘Comfort women’ photos to be revealed for the first time

‘Comfort women’ photos to be revealed for the first time 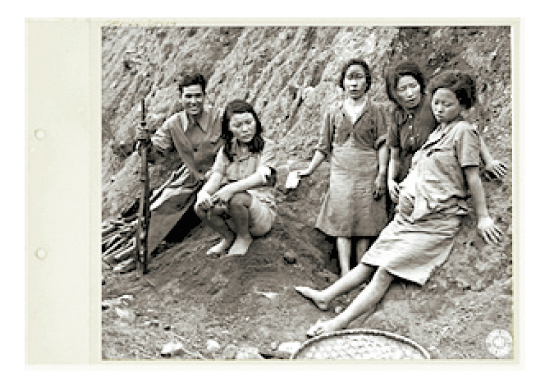 Park Young-shim, right, and other Korean sex slaves in a photo taken on Sept. 3, 1944. The photo, and two other photos of Korean women and girls forced into sexual slavery by the Japanese military during World War II, will be revealed to the public for the first time at an upcoming exhibition hosted by the Seoul Metropolitan Government and Seoul National University. [YONHAP]

Three photos of Korean women forced into sexual slavery by the Japanese military during the colonial period will be revealed to the public for the first time at an exhibition opening next week hosted by the Seoul city government.

The Seoul Metropolitan Government and a research team of Seoul National University said Monday that they will jointly hold an exhibition, titled as “Records, Memories: Stories of ‘Comfort Women,’ Untold Words,” at the Seoul Center for Architecture and Urbanism from Feb. 25 until March 20. The exhibition marks the centennial anniversary of the March 1 Independence Movement against Japan’s colonial rule of Korea.

According to the city government, the exhibition will display various records, photos and videos of the Imperial Japanese Army’s sexual slavery of women and girls before and during World War II. “Comfort women” is a euphemism used by Japan to refer to sex slaves.

The three photos of Korean sex slaves are a part of a photo album created by the U.S. military during the Asia-Pacific War. Until now, only the scanned images of the photos, kept by the National Archives and Records Administration of the United States, have been made public. This is the first time the real photos will be revealed to the public.

One depicts a pregnant sex slave, the late Park Young-shim, and four other women. Park later testified to the brutalities that the victims had suffered. A native of North Korea, Park was conscripted in 1938 and forced to work as a sex slave in China. After the war, she returned to the North in February 1946. After years of effort to reveal Japan’s crimes against humanity, she died in Pyongyang in August 2006.

Since 2016, the city government and the research team worked together to unearth records of Japan’s sexual slavery. In 2017, they made public a video record of Korean sex slaves for the first time. They also confirmed historical documents that proved at least 26 Korean girls and women were stranded on an island in the South Pacific after being forced to serve as sex slaves for Japanese naval forces during World War II.

This year’s exhibition is themed around the courageous testimonies of the victims, the organizers said. They also said four lectures are scheduled for weekends during the exhibition period. Seoul Mayor Park Won-soon will deliver a talk on March 3.

Park, a lawyer, participated in the Women’s International War Crimes Tribunal on Japan’s Military Sexual Slavery as a Korean prosecutor in 2000.

“New light is shed on many independence fighters as we commemorate the centennial anniversary of the March 1 Independence Movement,” Park said. “Victims of sexual slavery must be recognized for their contributions to lay bare Japan’s brutal crimes by bravely telling their stories. From now on, the Seoul Metropolitan Government will continue efforts to remember their history.”