Shin Jae-won, a 20-year-old rookie for FC Seoul, says he’s long used to being associated with his famous footballer father, Shin Tae-yong. And now he feels he’s ready to become his own man. 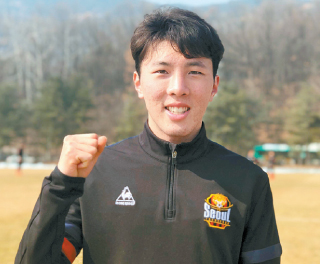 Shin Jae-won of FC Seoul poses for a photo after practice on Thursday. [YONHAP]

It’s always a challenge for second-generation athletes to move out of their parents’ shadows and certainly no less so for Shin.

The senior Shin was one of the country’s top players in the 1990s and was the first two-time MVP of the K League. After his career on the pitch ended, Shin coached the Korean men’s national team at different age brackets, including at last year’s FIFA World Cup in Russia. Though Korea was eliminated in the group stage, Shin coached the team to one of their most improbable victories, a 2-0 stunner over the defending champions Germany in the final group match.

And throughout his amateur career, Shin Jae-won was often called “Shin Tae-yong’s son.” Now entering his first professional season in the top-flight K League 1, the junior Shin said he’s determined to become his own man.

“I know I have to play well to make people call me ‘Shin Jae-won,’ not just ‘Shin Tae-yong’s son,’” the player said Thursday after FC Seoul’s practice in Guri, just east of Seoul. “The best thing about having such a great coach as my father is he’s always there to teach me one-on-one.”

As football players with famous fathers go, perhaps Cha Du-ri has had it the toughest so far in this generation. His father, Cha Bum-kun, is widely considered one of the best scorers to hail from Korea, having dominated the Bundesliga in the 1980s. And Cha Du-ri carved out a fine career of his own, having represented the country at two FIFA World Cups. Shin Jae-won said the younger Cha is his role model.

Signed as a free agent out of college, Shin is being asked to switch positions as a pro. He was a prolific scorer in college but has been getting some reps in training camp as a wingback.

“I am still not familiar with playing defense, but my teammates have been trying to help with my adjustments,” Shin said. “The camp has been a lot of fun. We have a lot of young players around my age, and we’ve all been pushing each other. I think we’ve given the team some youthful energy.”

Shin said he wasn’t yet nervous about the prospect of making his pro debut, though things may change once he steps on the pitch at Seoul World Cup Stadium, FC Seoul’s home.

“I’d like to play in as many games as I can and make the national team for the Tokyo Olympics next year,” he added. “Every football player dreams of playing for their country, and I also want to get called up for the senior national team down the road.”