Skater says she has proof of abuse by teammate

Skater says she has proof of abuse by teammate

Korean speed skater Kim Bo-reum said Thursday she stands by allegations of harassment she raised against a former teammate, adding that she has evidence to back up her claims. 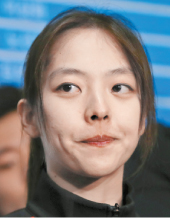 Kim was embroiled in a bullying scandal during the PyeongChang Winter Olympics last year, when she was accused of leaving fellow skater Noh Seon-yeong behind on purpose during a team pursuit race. Kim was also criticized for taking jabs at Noh in a post-race interview.

The uproar prompted the Sports Ministry to investigate the matter, and it concluded last May that there was no premeditated bullying on Kim’s part. The saga didn’t end there. In a televised interview in January, Kim claimed she had been the victim of verbal and emotional abuse by Noh.

On Tuesday, the first anniversary of the controversial Olympic race, Kim reiterated her allegations against Noh on her Instagram page, saying she’d endured “seven years of hell” at the national training center’s dormitory.

Kim maintained her stance on Thursday.

“Aside from myself, many other skaters were harassed by Noh Seon-yeong,” Kim said after her 3,000-meter race during the National Winter Sports Festival at Taereung International Rink in Seoul. “I have evidence to prove it and I am willing to disclose it.”

Asked how Noh harassed her specifically, Kim said Noh bullied her “regardless of time or place.”

“On the eve of a competition, she called me into her dorm room and lashed out at me for hours so she could throw me off and affect my focus,” Kim said. “She also raised her fist and acted like she was going to punch me. I am talking about these problems so that things will hopefully improve and no one else will go through what I did.”

Kim said she told the Sports Ministry about Noh’s alleged harassment in March of last year but said she has yet to receive a response. Kim called on Noh to respond, but earlier on Thursday, Noh refused to get dragged in.

“I don’t know why she’s saying these things at this particular juncture, but I have not done any of those things,” Noh said. “I’d rather not respond to these one-sided claims.”