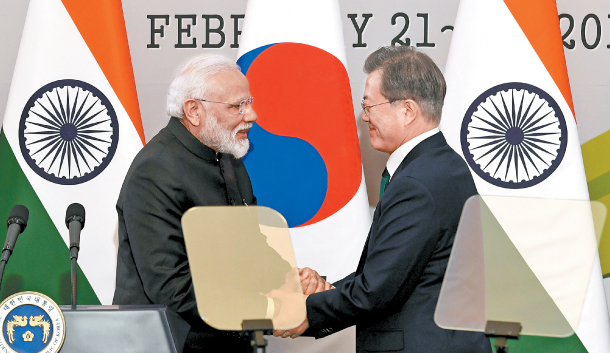 The agreements were made in a bilateral summit at the Blue House. Modi arrived in Seoul on Thursday morning for a two-day state visit, becoming the first leader of a foreign country to travel to Korea in 2019 on a state visit. It was to reciprocate Moon’s own state visit to India in July 2018.

The Blue House announced that four memoranda of understanding (MOU) were signed with the Indian government on Friday. One was that both sides agreed to issue a commemorative stamp of Heo Hwang-ok in the second half of this year, more commonly known as Empress Heo, whose husband was Kim Su-ro, the founding king of the Gaya confederacy (42-562). Their marriage is a common reference point used to highlight the long history of India-Korea ties.

Both countries agreed in a second MOU to boost police cooperation in sharing information and carrying out joint operations in terrorist attacks, cybercrimes, kidnappings or money laundering cases that both countries are involved in.

Korea’s Ministry of Trade, Industry and Energy signed an MOU with the Indian government agreeing to prolong the operation term of a team within Invest India that is in charge of helping Korean investors look for investment opportunities in India.

The team will work for two more years until January 2022. Invest India is a non-profit venture under India’s Ministry of Commerce and Industry that promotes and facilitates making investments in India.

In a fourth MOU, the Korean Ministry of SMEs and Startups agreed with the Indian government to establish a Korea start-up center in Gurugram in northern India to help Korean start-ups enter the Indian market and facilitate communication between Korean and Indian start-ups.

Moon and Modi vowed to increase bilateral trade more than two-fold over the next decade, from $21.5 billion last year to $50 billion by 2030, and speed through negotiations for improving their special strategic partnership.

Blue House spokesman Kim Eui-kyeom later explained to reporters that Vijay Keshav Gokhale, India’s foreign secretary, told Moon on Friday that his country was planning to construct seven new nuclear reactors and extended his hopes that Korea could participate in the construction project.

Moon replied that Korea’s nuclear power technology was globally renowned for its safety and economic feasibility, adding that if India asks Korea to help build nuclear reactors, Korean companies will be able to “profoundly contribute.”

In turn, the Indian foreign secretary asked Moon to use an Indian projectile when Korea launches a satellite, underscoring India’s cutting-edge technology in the space field.

Moon responded that the field Korea wants to cooperate with India “the most” is space technology, acknowledging that Korea is weak in producing projectiles, though its satellite technology is strong.

Without giving a definite answer on using Indian projectiles, Moon suggested they boost cooperation until both countries “explore the moon together.”

Both sides also agreed to cooperate in the fields of artificial intelligence, health care, robotics, information and communications technology, agriculture and fishing as well as infrastructure, including railways and ports.

Indian Prime Minister Modi expressed his support for the Korean government’s efforts on the North Korean denuclearization issue, and Moon said he appreciated the blessing as the second U.S.-North Korea summit nears.