Young people wait in line for the opportunity to participate in a lottery for seats in a classroom at a hagwon, or cram school. Speculations that government recruitment, as well as hiring by public institutions, expected to be at an all-time high this year, have led to an increase in the number of students preparing for national service exams around the country. [CHOI SEUNG-SHIK]

Before sunrise on a freezing morning earlier this month, a line of young people bundled up in long padded coats stood outside of a hagwon, or cram school, that prepares students for the national police officer exam in Noryangjin, southern Seoul.

The line that began forming at midnight was filled with students competing for one of the 130 seats in the front and center of the 600-seat classroom. The seats become available through a random selection that begin at 6 a.m., and those who win a spot in the center have the privilege of sitting close to the black board for the remainder of the week.

Some in line were even high school students.

“While going off to college is good, I was advised that it is better to start preparing for public servant exams at an early age,” said Song Yoo-jung, an 18-year-old high school junior. “I’m so focused on preparing for the [public servant] exam in August that it feels like taking classes at school is a waste of time.” 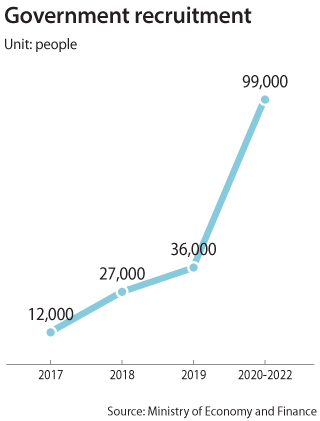 Since 2011, becoming a police officer no longer requires an educational background, allowing anyone over 18 to apply for the exam.

“I come here early in the morning every week to participate in the lottery,” said Kim Ki-sun, 25, who has spent the past year studying for the police officer exam. “Staying up all night studying with others motivates me.”

A cram school official said they tried to provide online registration to prevent students from lining up in the cold.

“But, either the server crashed or there were disputes over fairness,” the official, who requested anonymity, said. “Students who wait in line at dawn usually have a high probability of passing the exam, so we let them line up once a week.”

As speculations that government recruitment, as well as hiring by public institutions, is expected to be at an all-time high this year and that private companies will add fewer recruits to their ranks, people in their 20s and 30s are flocking to so-called gosiwon neighborhoods such as Noryangjin and Sillim-dong in southern Seoul.

Even on weekdays, it’s not hard to find students forming lines in front of a building in Noryangjin at 4 a.m. They will be waiting for at least two more hours before the doors to the self-study rooms inside open up.

The sudden increase in people interested in taking public exams has led major test prep companies to start constructing buildings over 10 stories high in the neighborhood.

Major development projects are in the works throughout many of these neighborhoods, including a light rail transit and a tunnel connecting Sillim-dong and Bongcheon-dong scheduled for completion in 2021. 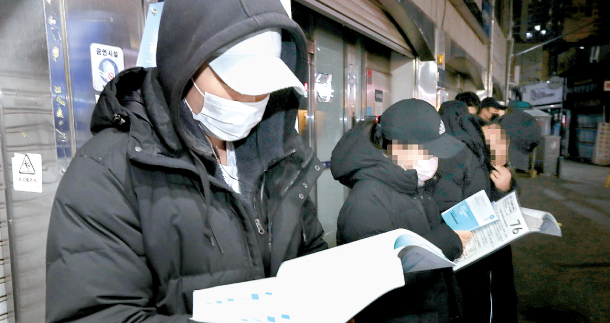 Students wait outside of a hagwon, or cram school, in Noryangjin, southern Seoul, in the hopes of securing seats in a classroom. The line began to form at midnight. [CHOI SEUNG-SHIK]

“The students preparing for the public servant exam and the police officer exam are now filling the void created by those that used to take law exams,” said a local real estate agent Lee Choong-yeol. “There’s also a strong demand for one-room apartments.”

Since Korea adopted a law school system, the last national law exam where those who passed became future prosecutors and judges took place in 2016.

The sudden rush of students heading toward Noryangjin or Sillim-dong is largely due to expectations that the government will create additional opportunities in the public sector following last year’s sudden increase.

“Even office workers in their 30s who failed the exam a couple of times in the past got in at the end of last year,” said a hagwon official.

Local government jobs are also expected to rise this year. Last year, 25,692 people were hired by local governments, a 28.4-percent increase compared to the previous year. The increase was an all-time record.

“This year we expect more people to be hired than last year,” said an official at the Ministry of Public Administration and Security.

Expanding the number of public servant jobs was a campaign pledge made by President Moon Jae-in. Under his pledge, a total of 174,000 public servants are set to be hired between 2017 and 2022.

Under a roadmap created by the Ministry of Economy and Finance, this year the government plans to hire a total of 36,000 people and that number is expected to scale up in the next three years.

On Feb. 13, Finance Minister Hong Nam-ki said the government plans to add an additional 2,000 jobs to its initial plan of adding 23,000 jobs at public institutions this year.

The government has become focused on creating jobs in the public sector as jobs in the private sector, particularly in the manufacturing industry, have been shrinking significantly.

The job figure is especially disappointing to the Moon administration, which came in to power promising quality jobs, especially for young people.

Yet some experts point out that a sudden increase in public servants could create new problems, such as pensions.

“During the National Assembly audit last year, the provision of public servant pension is estimated to be around 675.3 trillion won [$602.4 billion],” said Oh Jung-geun, chair of the Korea ICT Financial Convergence Association. “[Korea] could end up like Greece, which received a relief loan from the International Monetary Fund, if [the Korean government] recklessly expands the public sector.”

The public servant pension fund provision is the total amount of liability that the government has to pay not only on current recipients but also on future recipients while incorporating various factors such as life expectancy.

It is roughly the amount the government has to pay for the next 70 years.

“At a time when the number of security guards is declining because they are being replaced with unmanned systems, I strongly oppose blindly increasing the labor force [in the public sector],” said Kwon Eun-mee, a Bareunmirae Party lawmaker who was formerly a police officer.

During the National Assembly’s annual audit in October, Kwon said increasing the number of public servants doesn’t necessarily equal improvement in public services. She raised concerns that an artificial increase of jobs in the public sector could bring about larger problems in the future as it could result in complaints from young people when the number of jobs available drops drastically after a certain period of time.

“Although it would be an appropriate direction to increase the number of public jobs in safety areas like emergency responders and welfare positions, it is inappropriate to increase jobs just to ease unemployment rates for young people,” said Kim Jung-sik an economics professor at Yonsei University.