LG unveil V50 ThinQ with two screens ahead of MWC

LG unveil V50 ThinQ with two screens ahead of MWC 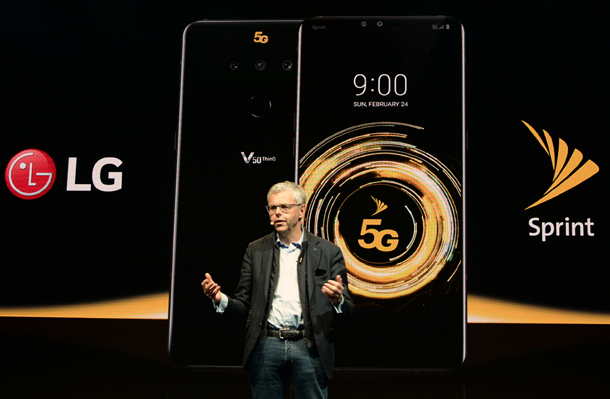 BARCELONA, Spain — LG Electronics launched the V50 ThinQ on the eve of the MWC 2019 in Barcelona on Sunday, presenting its vision of how the much-hyped 5G network can take a mobile device’s multimedia experience to the next level.

The V50 ThinQ is the tech giant’s first 5G smartphone, a direct competitor to Samsung Electronics’ Galaxy Fold and Huawei’s Mate X, both of which are equipped with foldable screens.

Rather than a foldable screen, LG Electronics has opted for a secondary detachable 6.2-inch screen, slightly smaller than the main 6.4-inch screen.

Held horizontally, the top screen could be displaying a smartphone game, while the screen on the bottom could be used for a virtual joystick to make the game experience more immersive.

“We believe in multimedia,” said Kim In-kyung, a senior vice president at LG Electronics in charge of 5G and network technology at the unpack event on Sunday in Barcelona.

“Creating content and broadcasting live are most relevant to our 5G products today.”

To help the hardware endure the increased data processing derived from 5G connectivity, its CPU, developed by Qualcomm, has been upgraded to the latest Snapdragon 855 and the battery capacity has been increased by 20 percent compared to the predecessor V40.

LG Electronics also unveiled the G8 ThinQ on Sunday, which is dedicated to the existing 4G network.

Placing the palm in front of the front camera will unlock the phone, while moving the fingers in specific ways will give various orders to the G8 ThinQ such as taking screenshots, activating music apps and controlling the volume.

Such functions will come in handy when users’ hands are too busy to actually touch the smartphone screen, such as when cooking or driving, according to the electronics company.

“Installing vein recognition in a mobile device is [a] first,” said David Montanya, a product evangelist from LG Electronics’ mobile communications team at the unpack event. “It [allows the users] to make more intuitive interaction[s] with the smartphone. It anticipates your moves and intentions and reacts accordingly."

Montanya also added that palm veins are a safer way to protect the phone compared to other biometric methods such as finger prints.
"The probability of two people having the same vein structure is less than one-in-a-billion," he said.

While an innovative feature is always a selling point for mobile devices, an experimental one that doesn’t yet work properly is not a good sign. The new palm-reading feature obviously required intensive training in order to get the hang of the specific hand gestures needed to activate the sensors.

A specific timeline for the two new phones’ launch in Korea hasn’t been revealed.